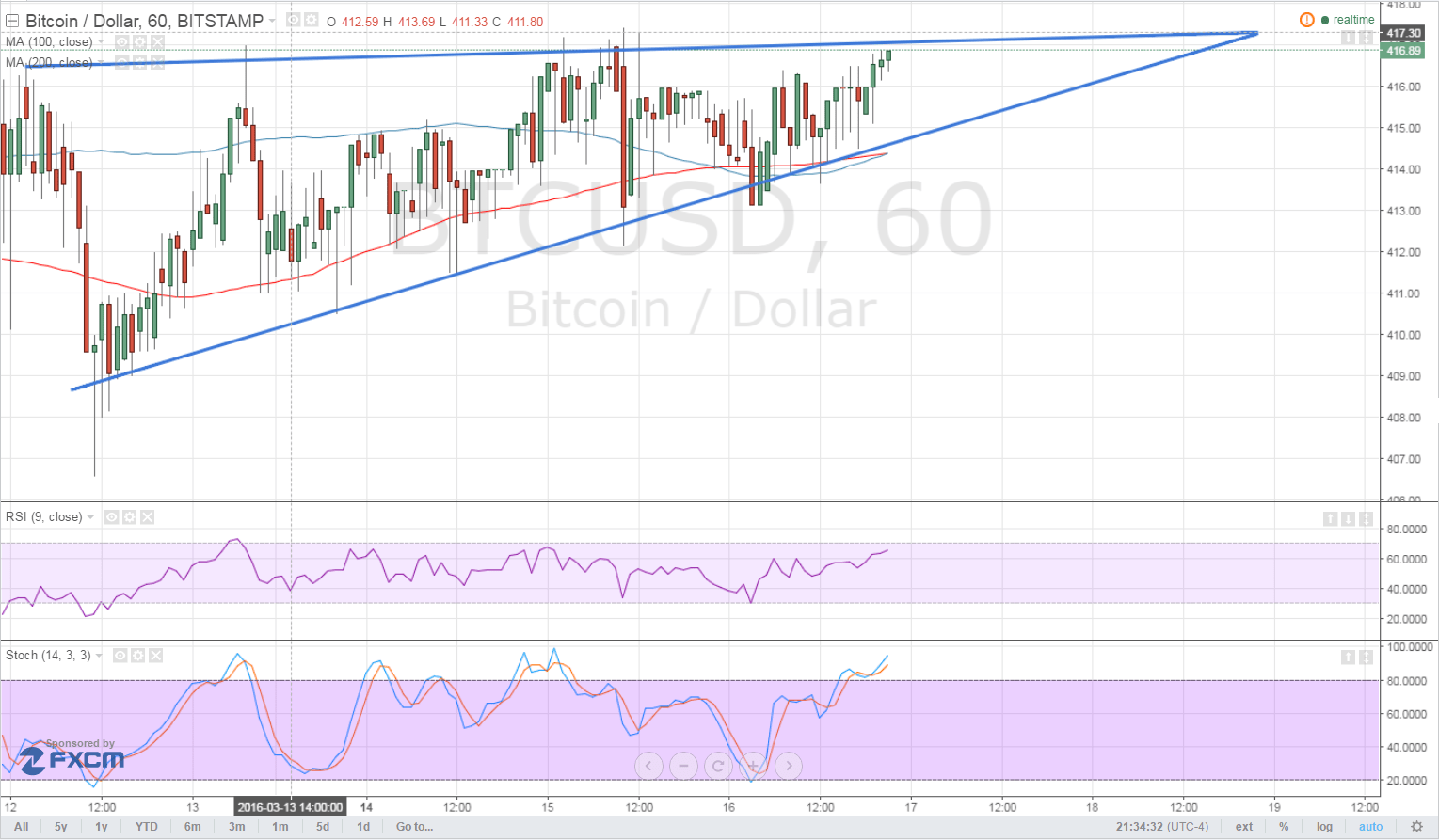 Bitcoin price is trading inside a rising wedge formation, with bulls trying to push for more gains.

RSI is on the move up, which means that buyers are in control of bitcoin price action at the moment. However, price is nearing the top of the wedge, which might hold as resistance and lead to a bounce back to the wedge support near $415. Also, RSI is near the overbought zone.

Stochastic is in the overbought level already, signaling that buyers might need to take it easy from here and allow sellers to take over. If so, resistance around $418 could hold and lead to a test of support, which is near the moving averages.

Speaking of MAs, the 100 SMA and 200 SMA are oscillating so there’s also a chance that the consolidation could carry on. However, the 100 SMA appears to be making an attempt to cross above the longer-term 200 SMA to indicate that the path of least resistance is to the upside.

A breakout in either direction could mean around $15 in gains or losses for bitcoin price, as this is the height of the rising wedge formation. A long green candle closing past $418 could be enough to show an upside breakout while a long red candle closing below $415 might signal a downside break.

The FOMC statement did little to boost volatility for bitcoin price action, although the US dollar did lose a lot of ground against its other counterparts. Risk appetite picked up, causing higher-yielding equities and currencies to advance.

The Fed decided to keep rates unchanged as expected but also hinted that there might be fewer hikes than initially anticipated for the year. FOMC policymakers also downgraded their forecasts for growth and inflation this year, citing the downside risks stemming from the slowdown in China, Mexico, Japan, Canada, and emerging nations.

Fed Chairperson Yellen also noted that the gains in the job market are only having a modest effect on inflation and that the US central bank has enough policy tools to use if additional stimulus is needed.

A couple more major catalysts are on today’s schedule, namely the SNB rate statement and the BOE monetary policy decision. No actual changes are expected from both central banks as well, although any shift in their bias could also impact overall market sentiment and USD behavior.

A continuation in risk-taking for today’s trading sessions could give bulls enough energy to push bitcoin price past the wedge resistance onto the next ceiling around $440-450. Further gains past that area could lead to a move up to the longer-term resistance at $465.

On the other hand, a return in risk aversion could weigh on bitcoin price enough for a break of the wedge support, taking it down to the $400 support zone.