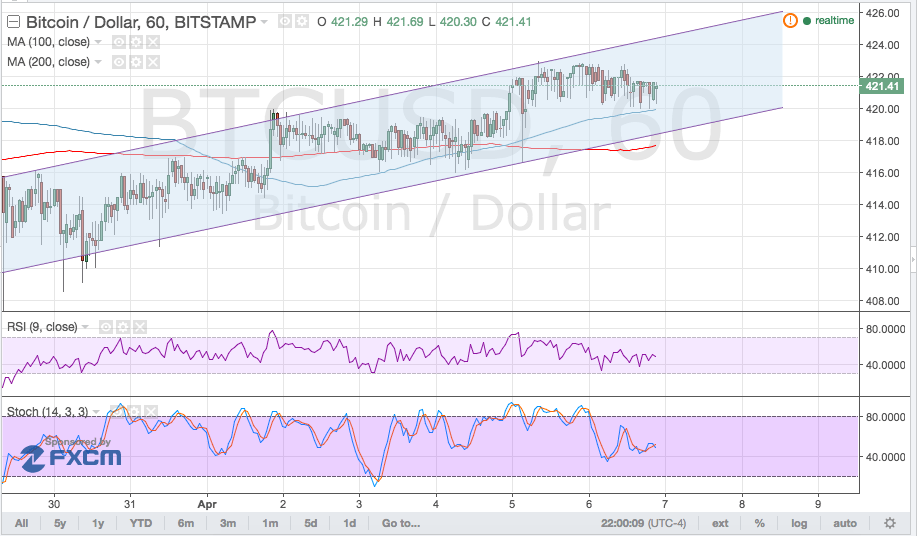 Bitcoin price is gearing up to test the channel support near $417-420 and might be due for another bounce.

The 100 SMA is safely above the longer-term 200 SMA so the path of least resistance is to the upside. This confirms that a bounce off support is likely to take place, as this area also coincides with the 200 SMA dynamic inflection point.

However, stochastic is on the move down, indicating that bitcoin price might follow suit. RSI is moving sideways so consolidation could be in play. Still, a strong return in buying pressure could lead to another test of the resistance around $425 or even a break higher.

The FOMC minutes gave a bit of support to the dollar, as the transcript indicated that two policymakers voted to tighten monetary policy in March. However, they were outvoted by other officials who thought it would be prudent to wait for more data.

Fed policymakers acknowledged the resilience in the US economy despite the ongoing global growth slowdown, highlighting the strength in employment and in the housing sector. Still, some expressed concerns that the rising inflation trends might not be sustained.

Risk-taking has actually been in play yesterday but bitcoin price failed to take advantage of this. Crude oil prices have rallied again, supported by reports of falling US stockpiles and increased odds of cooperation for the upcoming OPEC meeting.

Tags: bitcoin pricebitcoin technical analysisbitcoin tradingbtcusd price
Tweet123Share196ShareSend
Win up to $1,000,000 in One Spin at CryptoSlots