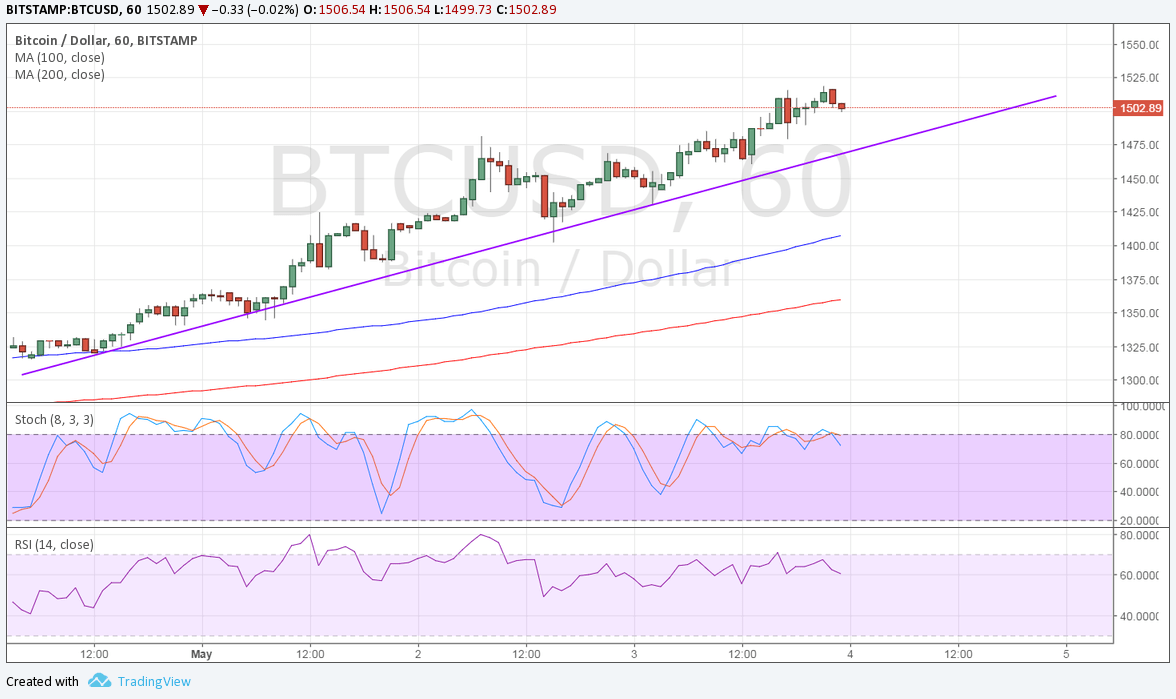 Bitcoin price is gaining more upside traction and could be poised to establish another set of record highs after a quick dip.

The 100 SMA is above the longer-term 200 SMA so the path of least resistance is to the upside. The gap between the moving averages and between the actual price and these indicators are all widening to reflect strengthening bullish momentum.

However, stochastic is already heading down from the overbought zone on the 1-hour chart to signal a possible return in selling pressure. This could spur a pullback to the rising trend line connecting the lows since the start of the month. If support at $1475 holds, another bounce to $1500 or higher could be seen. RSI is turning down as well and bitcoin price might follow suit.

Dollar strength ensued after the release of the ADP non-farm employment change and the ISM non-manufacturing PMI data, as well as the FOMC statement. After all, both reports hinted at a potential upside NFP surprise later this week while the latter confirmed that the US central bank is still on track to hike rates two more times this year.

Still, bitcoin price was able to hold on to its lead versus the dollar in the past trading sessions. As in the previous days, higher trading volumes and demand in Japan is shoring up the cryptocurrency as the Japanese government recently announced their decision to recognize bitcoin as a legal form of payment.

Analysts noted that 50% of daily trading volume recently has come from Japanese exchanges, leading some to speculate that Japan might soon overtake China in terms of market share. Keep in mind that trading activity in China has slowed due to the government’s efforts to crack down on cryptocurrency trading.