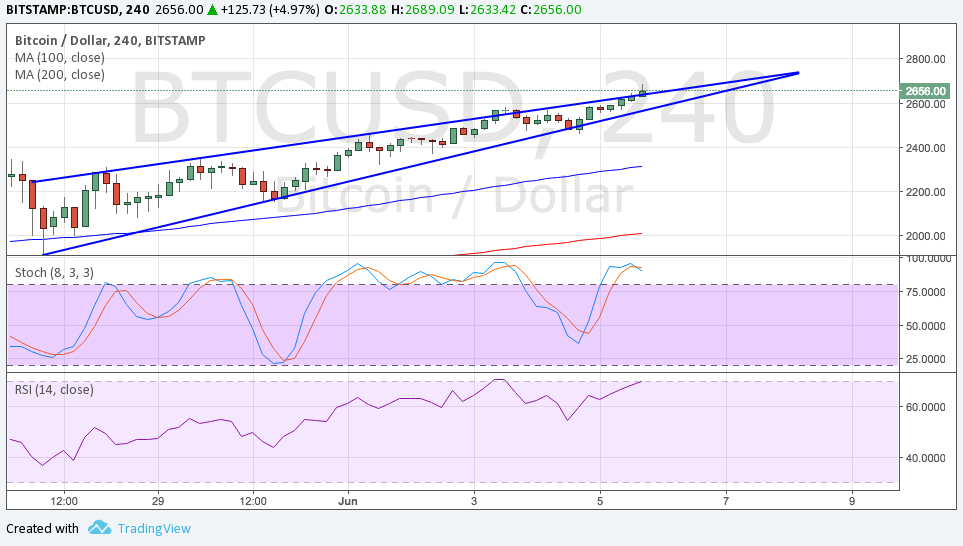 Bitcoin price is consolidating in a rising wedge chart pattern at the moment, and a breakout could be due pretty soon.

The 100 SMA is safely above the longer-term 200 SMA on this time frame so the path of least resistance is to the upside. The moving averages have been maintaining a steady gap so there’s no likelihood of a downward crossover anytime soon.

A break below the wedge support could draw some sellers to the mix but bitcoin price might still be able to bounce off the 100 SMA dynamic inflection point, which lines up with the bottom of an ascending channel connecting the recent lows.

Stochastic is already indicating overbought conditions, though, so a selloff could be underway. Similarly, RSI is in the overbought level so buyers might also be feeling exhausted and willing to let sellers take over for the time being.

There are a couple of major geopolitical risks in play these days, so there’s a good chance that bitcoin price can hold on to its gains. For one, the upcoming UK elections could lead traders to shy away from European markets as the results appear too close to call. This could determine how Brexit negotiations pan out and therefore the future of the European region.

In another part of the world, there is tension brewing in the Middle East as Saudi Arabia cut diplomatic ties with Qatar. The latter has been accused of supporting extremist war efforts in Iran, and this rift could make it more difficult for the OPEC to enforce its output deal extension. With that, demand for alternative assets like bitcoin could stay supported as uncertainties remain.

LPNT’s Approach To Be Table Toppers In Cryptocurrency Market