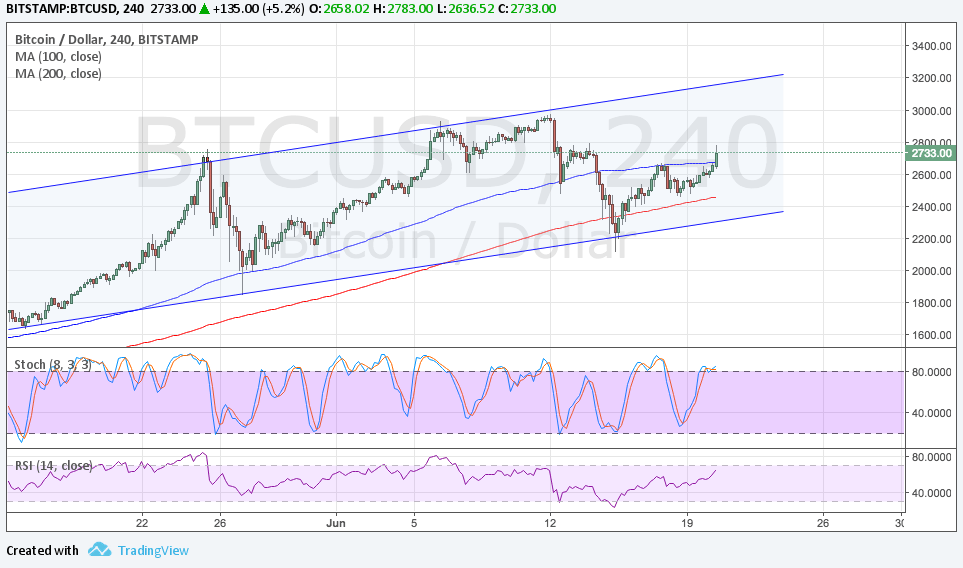 Bitcoin price is showing a pickup in bullish momentum but technical indicators are giving mixed signals.

The 100 SMA is above the longer-term 200 SMA so the path of least resistance is to the upside. However, the gap between the moving averages is narrowing to reflect weakening buying momentum. If a downward crossover happens, bears could get back in the game and push for another test of support.

The 200 SMA is close to the channel support around $2400 so this might be the line in the sand for the uptrend. A break below this area could encourage more sellers to hop in or spur bulls to liquidate their holdings.

Stochastic is already dipping into the overbought territory to suggest that buyers are feeling exhausted. RSI is still on the move up so bitcoin price might follow suit while buying pressure is in play, but this oscillator is nearing overbought levels also. Once both turn lower, a dip in price action could be seen.

US equity indices are edging down once more as the tech sector has been unable to sustain its climb. In addition, a bleaker outlook for the crude oil market is starting to dampen risk appetite.

A pickup in risk aversion could shore up bitcoin price gains once more as traders typically search for higher returns in alternative markets like cryptocurrencies during these scenarios. Keep in mind that Brexit talks are going on so there’s also that extra degree of uncertainty in the European region.

Meanwhile, reports indicating that Bitcoin is about to be accepted as a legal form of payment in India revived speculations of higher volumes similar to the effect seen when the Japanese government made the announcement earlier this year.