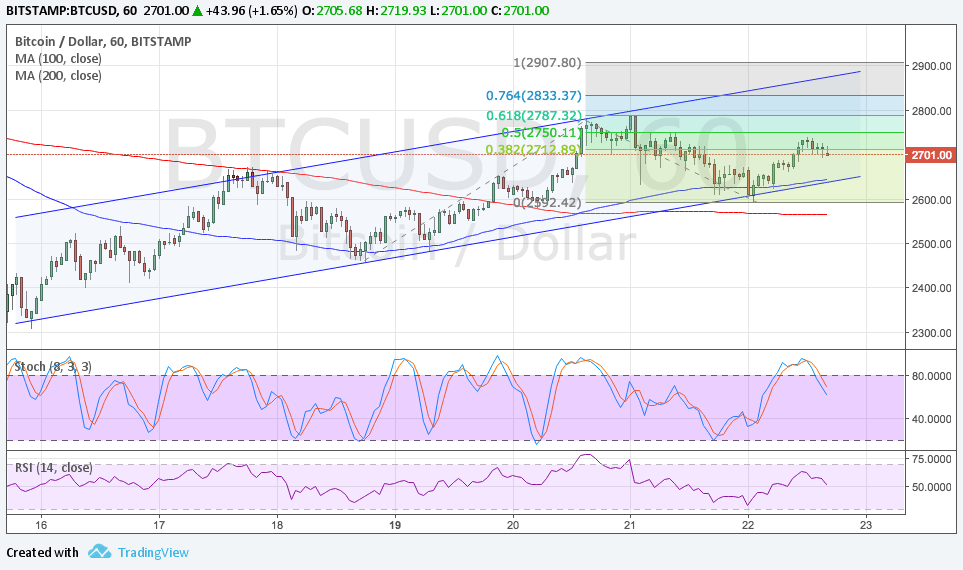 Bitcoin price completed its correction to the channel support and bulls are now setting their sights back on resistance.

The 100 SMA is above the longer-term 200 SMA on the 1-hour time frame so the path of least resistance is to the upside. In addition, the short-term moving average lined up with the channel support, adding to its strength as a floor in the event of another dip.

The Fibonacci extension tool reveals that the next ceiling could be around the $2800 mark or the previous highs. A larger rally could last until the channel resistance around $2850 or to the full extension just slightly above the $2900 mark.

However, stochastic is already turning lower from the overbought zone to indicate a return in selling momentum. RSI also seems to be heading south as well, so bitcoin price might follow suit, even without indicating overbought conditions. Still, the gap between the moving averages is getting wider to reflect a buildup in bullish momentum.

The Ethereum flash crash in GDAX may have sparked some jitters in the cryptocurrency market but this seems to have shored up demand for other competitors like bitcoin. Uncertainties related to Brexit are also encouraging European traders to put funds in bitcoin to pursue higher returns outside of traditional stocks or commodities.

Meanwhile, news that India is moving closer to regulating Bitcoin has been positive for startups and investors in the country. This was also supported by news that a Bitcoin wallet startup called Blockchain has received $40 million in funding to expand its operations to more countries.

TA: Bitcoin Short-term Pullback Could Be Attractive To The Bulls