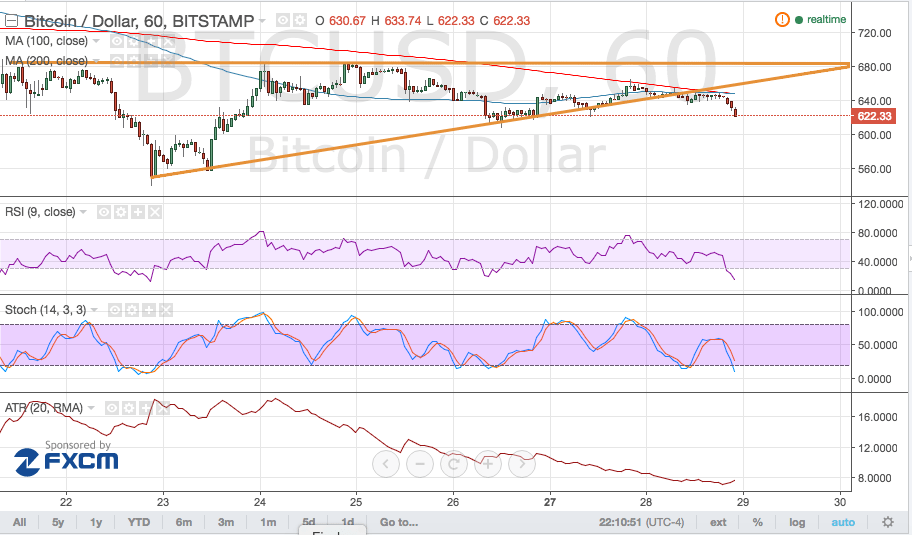 Bitcoin price broke below its triangle support to indicate that the selloff isn’t over yet.

The 100 SMA is below the 200 SMA so the path of least resistance is still to the downside. In addition, these moving averages held as dynamic inflection points and pushed bitcoin price down. However, the gap between the two moving averages has closed and an upward crossover seems imminent, likely indicating a return in bullish pressure.

If so, bitcoin price could pull back to the broken triangle support before resuming its drop. A stronger return in buying momentum could lead to a test of the triangle resistance at $680.

Stochastic is on the move down, confirming that sellers have taken control. RSI is also heading south so bitcoin price could follow suit. However, once these oscillators reach the oversold regions and turn higher, buyers could regain strength. Bitcoin price is now nearing an area of interest at $600.

The post-Brexit fallout appears to have faded and traders are now booking profits off their recent long bitcoin positions since risk appetite appears to be returning. In addition, equities have shown gains so investors may be putting their money back in the stock markets and away from bitcoin.

Apart from that, data from the US economy has been much stronger than expected yesterday. The final GDP reading was upgraded from 0.8% to 1.1%, outpacing the consensus at 1.0%. Components of the report showed that the upgrade was mostly due to higher export activity, suggesting that the US economy could maintain its strong footing even if the Brexit does result in a global slowdown.

Moving forward, risk sentiment could continue to influence bitcoin price action but today’s US releases (personal spending and income, core PCE price index) could also have a say in BTCUSD movement. Stronger than expected data could continue to prop the US dollar up against bitcoin.