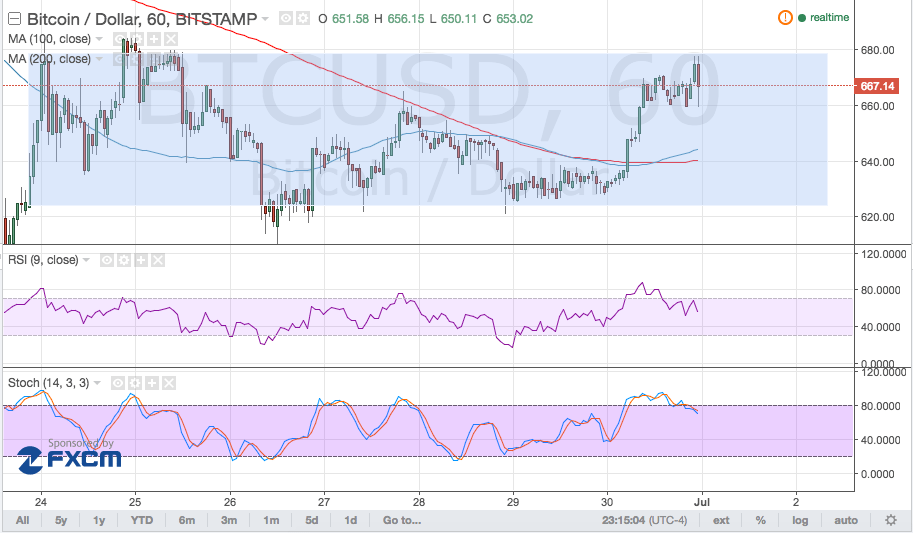 Bitcoin price appears to be moving sideways between $620 and $680 while traders wait for larger market catalysts.

The 100 SMA is completing an upward crossover from the 200 SMA, signaling that buyers are trying to take control of price action. If so, an upside breakout from the range resistance could be seen, taking bitcoin price up by $60 or the same height as the rectangle formation.

However, stochastic is on the move down, indicating that sellers are taking the upper hand. This could be enough to send bitcoin back to the bottom of the range or at least until the dynamic inflection points at the moving averages.

RSI is also on the move down to show that bearish pressure is building up. If sellers push harder, a break below support could send bitcoin lower by $60 or the same size as the range.

It’s the start of a new month and quarter so traders may be reestablishing their previous positions after a bout of profit-taking in the past couple of days. Larger positions could mean larger moves for bitcoin, especially since major market themes appear to be emerging.

There’s talk of additional easing by the Bank of England following the UK decision to exit the EU. Other central banks also appear to be shifting to a more dovish stance, which might lead traders away from currency markets and onto virtual currencies which can’t be impacted by policy decisions. Apart from that, the prevailing uncertainty from the Brexit could also dampen gains in equity markets and make bitcoin more lucrative.

Chinese PMI readings are up for release today and the outcome should also influence bitcoin demand in the country, which has been mostly responsible for the surge in bitcoin price in late May.