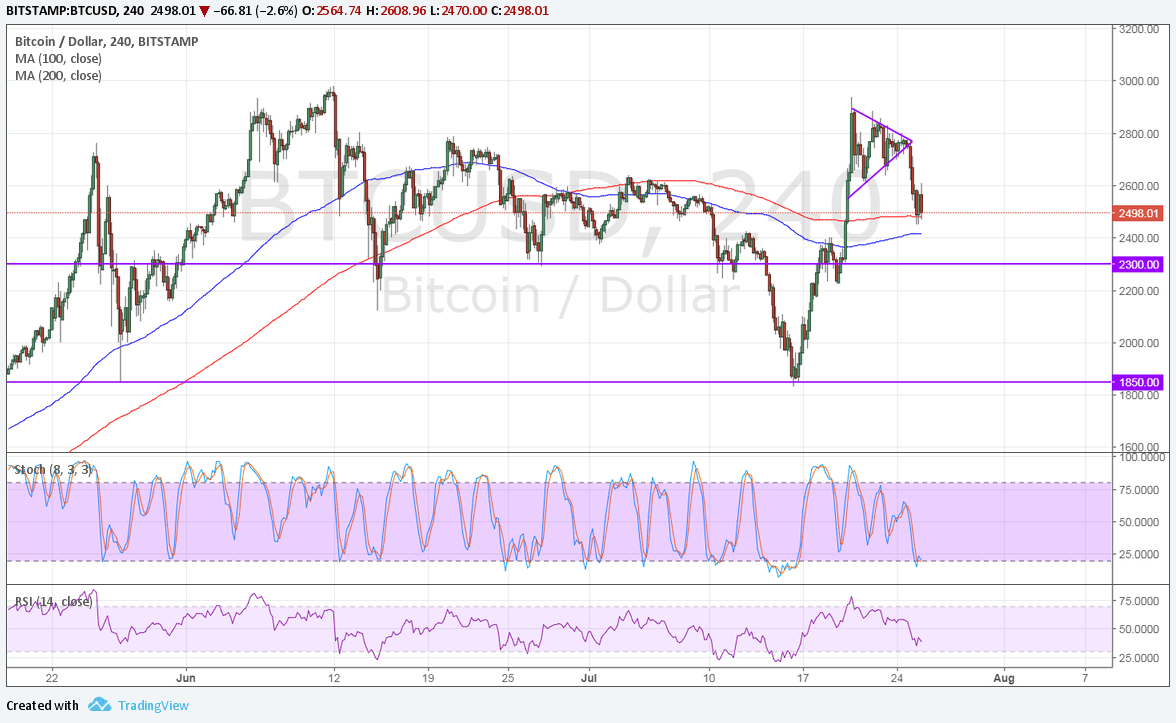 Bitcoin price was unable to show bullish momentum past its recent highs, paving the way for a test of the nearby support levels.

The 100 SMA is below the longer-term 200 SMA so the path of least resistance is to the downside. However, the 200 SMA appears to be holding as near-term dynamic support at the moment and bitcoin price might need to push past these barriers before gaining traction on its selloff.

The next support levels are located at $2300 then at $1850. Stochastic is heading down so bitcoin price might follow suit while bearish pressure remains in play. RSI is also moving lower to confirm that sellers are in control of price action.

However, it’s also worth noting that both oscillators are nearing oversold levels so there’s a chance that buying pressure could return soon.

Bitcoin has actually drawn strong support from the BIP 91 lock-in as this marks the start of the move towards the SegWit2x upgrade. However, dollar bulls are refusing to back down on the heels of upbeat US reports, positive earnings, and progress in fiscal reform.

The latest boost to the dollar came mostly from the Senate vote to open the debate on the healthcare bill, which would mean amendments to the current version before the final legislation to replace or repeal Obamacare is passed. This marks a significant development in the Trump administration’s push for fiscal policy changes, renewing hopes that tax cuts could follow a similar path.

Also, expectations ahead of today’s FOMC announcement are also keeping the dollar afloat against bitcoin price. Although the June CPI and retail sales fell short of estimates, upbeat leading indicators like the CB consumer confidence and manufacturing PMIs are hinting that policymakers could stay optimistic with their assessment.