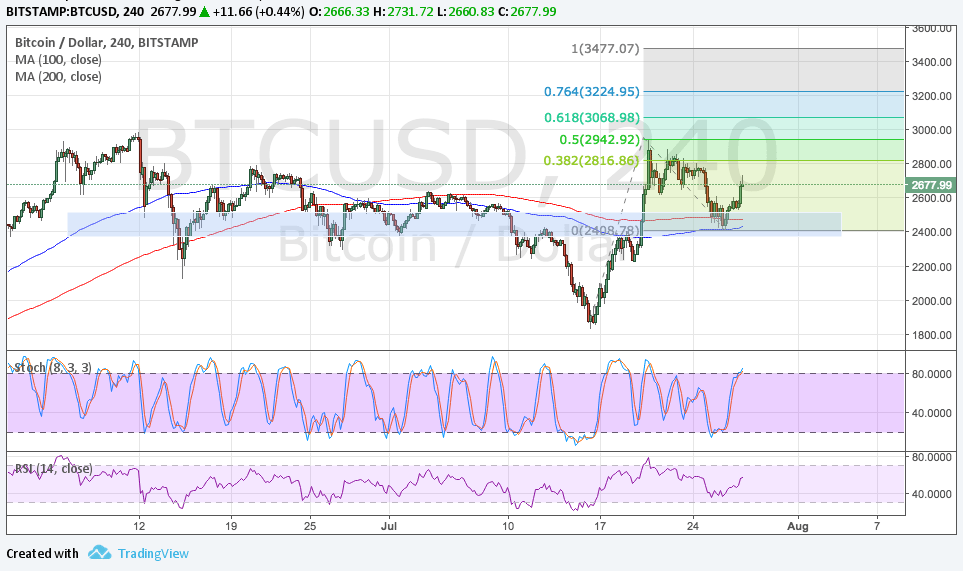 Bitcoin price found support at the mid-range area of interest and is setting its sights back on its all-time highs.

The 100 SMA is still below the longer-term 200 SMA so the path of least resistance might still be to the downside. However, the gap between the moving averages is pretty narrow so a crossover might be possible soon, drawing more buyers to the mix.

Stochastic is still pointing up to confirm that buyers are in control of the game and could push for more gains. RSI is also moving higher so bitcoin price might follow suit. However, once both oscillators hit overbought regions and turn lower, selling pressure could return.

The US dollar has been bogged down by a more cautious sounding FOMC which signaled that they haven’t set an actual date for the balance sheet runoff. The Fed also downgraded their inflation assessment slightly, leading some to believe that a delay in the next rate hike could be expected.

However, the dollar could be poised to recover as the Trump administration continues to make slow but moving progress in its reform agenda. Senate has recently opened the discussion for the healthcare repeal while the House approved the increased budget for military spending next year and the construction of Trump’s border wall.

As for bitcoin itself, not even warnings that the cryptocurrency is a pyramid scheme according to asset manager Howard Marks was enough to stem the rally. Investors seem to be pinning their hopes on a smooth transition to SegWit by August 1 that can avoid hard fork issues.