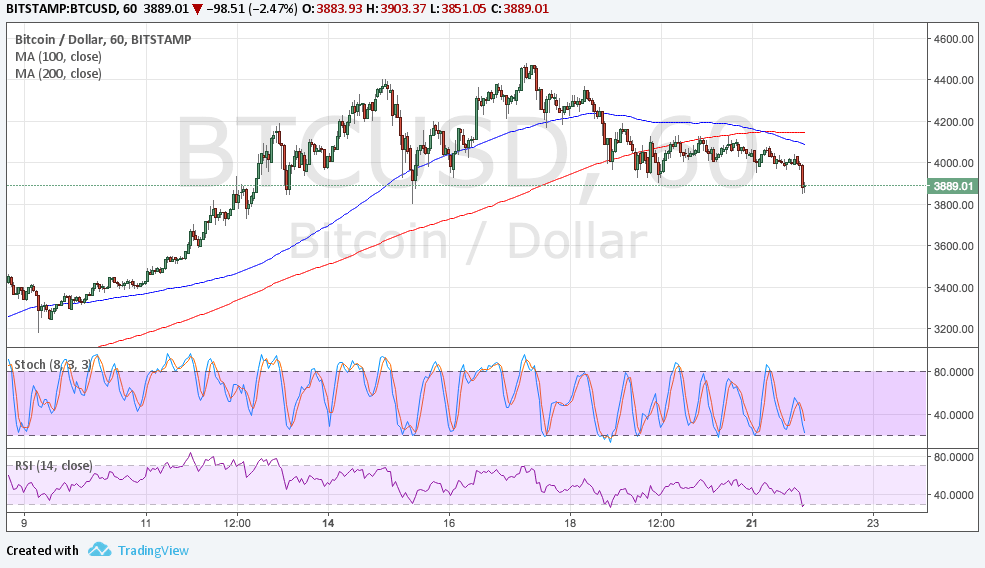 Bitcoin price could be due for a long-term sell-off on confirmation of this head and shoulders formation.

The 100 SMA crossed below the longer-term 200 SMA to show that the path of least resistance is to the downside. This means that the support is more likely to break than to hold. Note that the chart pattern is approximate $600 tall so the resulting drop could be of the same size, taking Bitcoin price to $3200.

Stochastic is also turning lower to indicate a pickup in selling pressure. RSI is on the move down but is already dipping into oversold territory, which means that bears might be tired and could be willing to let buyers take over. If so, another bounce back to the $4400 area could happen.

A return in uncertainty surrounding the hard fork earlier this month weighed heavily on Bitcoin price after Bitcoin Cash reportedly won more mining power. This could revive incompatibility troubles if more exchanges start accepting this version of the Bitcoin software, along with the original version.

Bitcoin Cash previously held 25% of mining power and this figure has since grown to 30%, leading to speculations that it could be on track to replace Bitcoin Core.

Traders are now turning their attention the activation of SegWit, which would increase the capacity of Bitcoin network in terms of handling transactions. Any setbacks could further dampen Bitcoin price while indications that it could still go smoothly could lead to a big bounce or even the creation of new all-time highs.

Meanwhile, dollar demand could also take a hit from ongoing geopolitical uncertainties pertaining to North Korea and within the Trump administration. Fed Chairperson Yellen’s speech in Jackson Hole could also be a big catalyst for BTCUSD action.