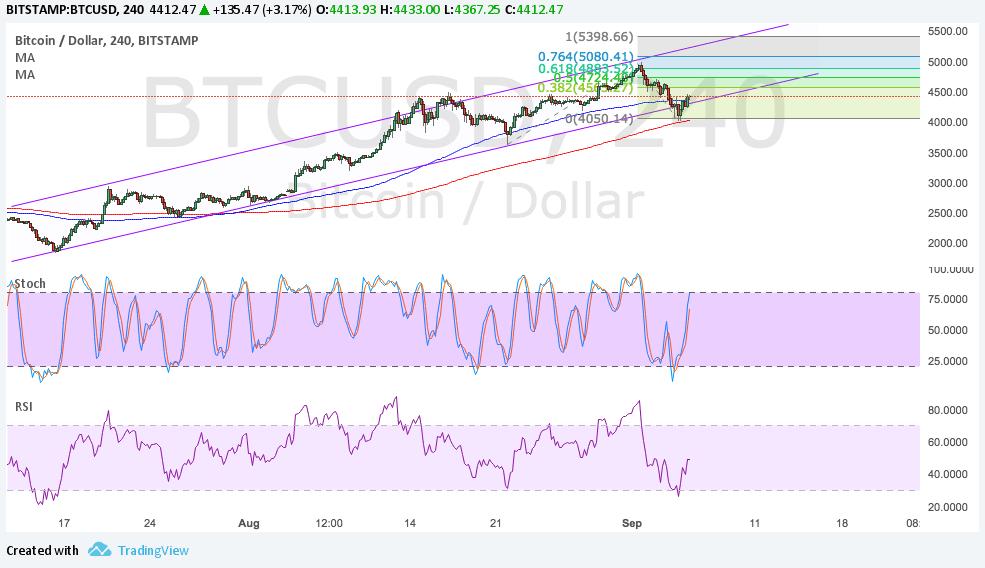 Bitcoin price is fighting to keep the uptrend intact and may be setting its sights on new record highs.

The 100 SMA is still safely above the longer-term 200 SMA on the 4-hour time frame, which means that the path of least resistance is to the upside or that the uptrend could carry on.

The 100 SMA lines up with the channel support but it’s the 200 SMA that has held as dynamic resistance so far. However, it’s also worth noting that the gap between the moving averages is narrowing to indicate weakening bullish momentum or a potential downward crossover.

Stochastic is moving higher to reflect the presence of bullish momentum so bitcoin price might follow suit. RSI is also pulling up from the oversold region to indicate that buyers are trying to keep bitcoin afloat.

Geopolitical risk is still in play while tensions with North Korea persist. This could ensure that bitcoin price might stay afloat even with Chinese regulation weighing on cryptocurrency activity.

Earlier this week, several government agencies issued a joint statement banning ICO funding and this could put a dent on trading activity with exchanges and bitcoin startups. This has led to a sharp dip in bitcoin price but there are signs of resilience.

Dollar demand is also taking a hit after FOMC policymakers warned about the risks of hiking in a low inflation environment. FOMC member Brainard noted that the central bank should pay closer attention to underlying inflation trends while Kashkari claimed that the recent hikes are doing the economy harm. This suggests that both committee members aren’t likely to vote for a hike in September and might urge their other policymakers to sit on their hands also.