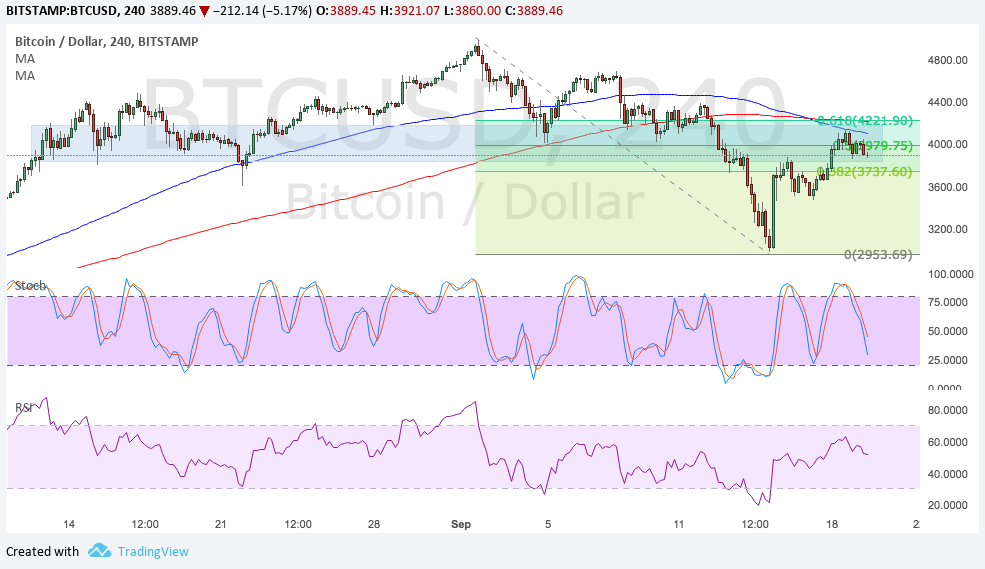 Bitcoin price is having a tough time busting through the $4000 barrier but sellers have yet to pile on their positions.

The 100 SMA has crossed below the longer-term 200 SMA to show that the path of least resistance is to the downside, which means that the selloff is more likely to resume than to reverse. In addition, the 200 SMA dynamic resistance lines up with the 61.8% Fibonacci retracement level at $4200, which could be the line in the sand for a correction. A break past that level could put bitcoin price back on track towards testing its record highs around $5000.

Stochastic is still on the move down so bitcoin price might follow suit until the swing low around $2950. Stronger selling pressure could lead to a break below this area of interest.

RSI hasn’t quite reached the overbought zone yet so there may be some bullish momentum left, but the oscillator also appears ready to turn lower to indicate a return in selling pressure.

Volume has dipped following reports that bitcoin exchanges in China will be shut down in compliance with government regulation. This has drastically reduced activity as well, although other top markets like Japan could shore up the numbers later on. The cryptocurrency still remains a bit supported by the likelihood of resurfacing geopolitical tensions after Trump threatened retaliation to North Korea.

Meanwhile, financial markets are also feeling nervous ahead of the FOMC decision this week as downgrades to growth forecasts are eyed. Some even expect the US central bank to drop its rate hike prospects for December on account of the recent hurricanes.

In any case, additional volatility could be seen for BTCUSD around the event as there will be a press conference after the official announcement and Chairperson Yellen’s responses to questions would likely push the dollar around.