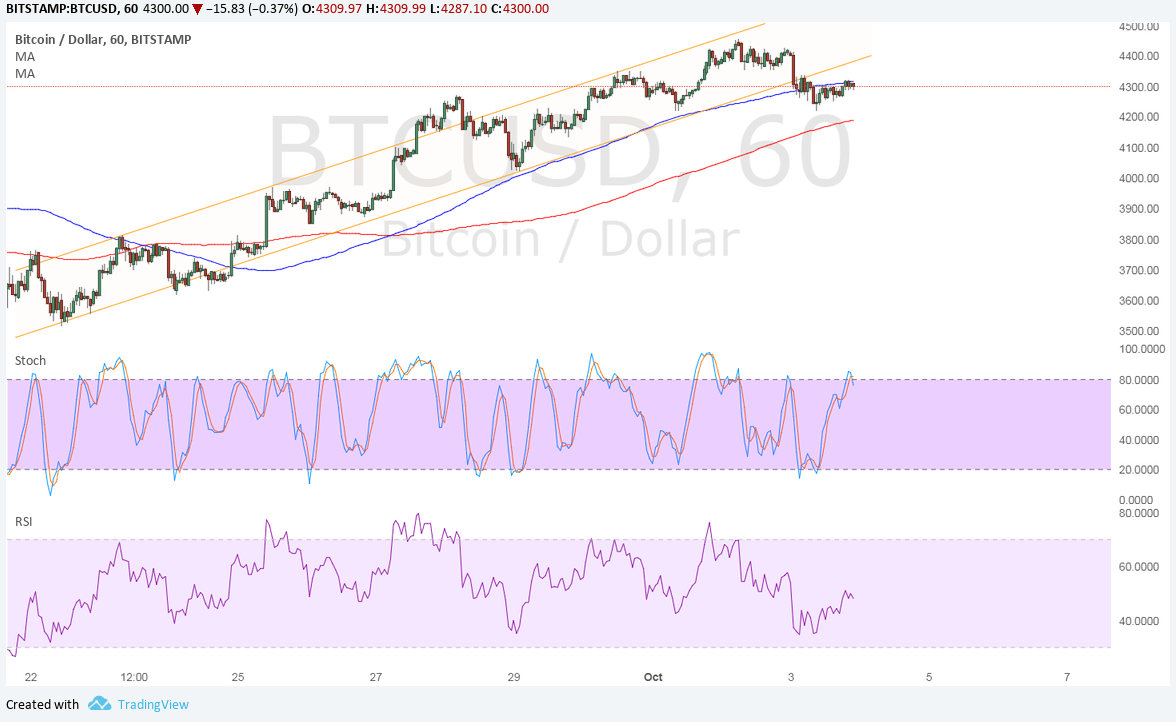 Bitcoin price has broken below the ascending channel support on its short-term time frame, signaling that a selloff may be underway.

The 100 SMA is above the longer-term 200 SMA so the path of least resistance might still be to the upside, which means that the uptrend is more likely to continue than to reverse. The 100 SMA is also holding as dynamic support at the moment, and a break lower could still find a floor at the 200 SMA.

Stochastic has been on the move up but seems to be crossing lower to reflect a return in bearish pressure. RSI, on the other hand, is heading north so bitcoin price might follow suit.

If bullish momentum returns, bitcoin price could still climb back inside the channel and resume its move up to the resistance around $4500. But if bearish pressure kicks in, a drop below the 200 SMA dynamic inflection point could confirm that a longer-term drop is taking place.

Dollar demand is increasing thanks to a strong showing from leading jobs indicators, which could set the tone for an upside NFP surprise. In that case, Fed December hike expectations could increase and lead to more gains for the currency.

Still, bitcoin price has plenty of factors on its side, one of which is persistent geopolitical risks, this time stemming from the European region. Apart from that, the increase in bitcoin core nodes by 30% in the past three months signaled strong support for this version of the software and continued to ease incompatibility concerns over the hard fork.

Some analysts predict that bitcoin price could reach $6000 this year, although additional volatility could be seen before that happens. Another hard fork could take place if members of the bitcoin community reject SegWit2x.