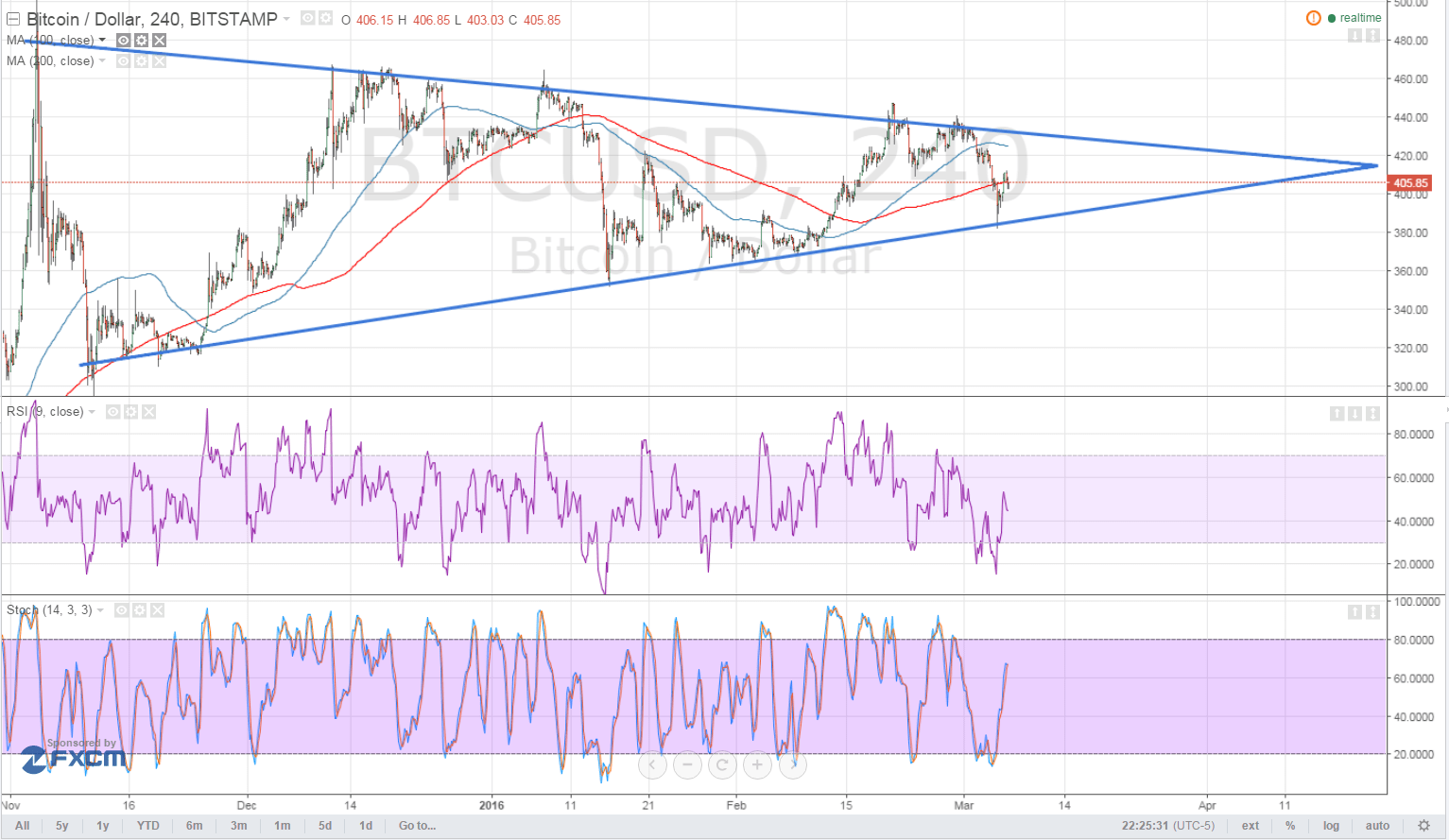 Bitcoin price just came off a test of the triangle support and might be due for another move towards resistance.

The 100 SMA is above the 200 SMA, signaling that the path of least resistance is to the upside. Stochastic is on the move up, which also confirms that buyers are in control of price action for now, likely pushing for a test of the triangle top around $420-430.

RSI is also heading north so price might follow suit. Stronger bullish pressure might even lead to an upside break of the triangle resistance and a prolonged uptrend for bitcoin price. In that case, price could resume its climb to the next resistance around $465 then onto its previous year highs at $500.

On the other hand, a break below the triangle support could lead to a long downtrend for bitcoin price, likely taking it down to the next floor at $300 or much lower.

Last Friday’s NFP release brought volatility for bitcoin price as expected. The US economy added 242K jobs in February, higher than the projected 195K gain, while the previous reading was upgraded from 151K to 172K. The jobless rate was unchanged at 4.9% as expected but the average hourly earnings figure fell short with a 0.1% decline versus the estimated 0.2% uptick.

There are no major reports lined up from the US economy today but a couple of FOMC members are scheduled to give testimonies. Any indications of a potential Fed rate hike this month or in the coming months could still drive dollar demand, triggering a break below the triangle support and a prolonged downtrend for bitcoin price.

On the other hand, more remarks against tightening could keep risk appetite in play. Commodity prices have been on a tear lately, driven partly by rising crude oil on the heels of falling US oil rig counts. In addition, positive updates from the discussions among oil producers regarding an output freeze could lead to stronger gains among higher-yielding assets, including bitcoin.

Zooming in to the 1-hour time frame shows a potential near-term resistance at the Fib levels or $420 area near the descending trend line. On this chart, the 100 SMA is below the 200 SMA so there’s a chance that the selloff could resume.

In addition, both RSI and stochastic are on the move down, confirming that bearish momentum is present. If the current 50% Fib level holds as resistance, price could still test the previous lows or go much lower. On the other hand, a break past the trend line resistance around $420 could be an early signal of a long-term uptrend.