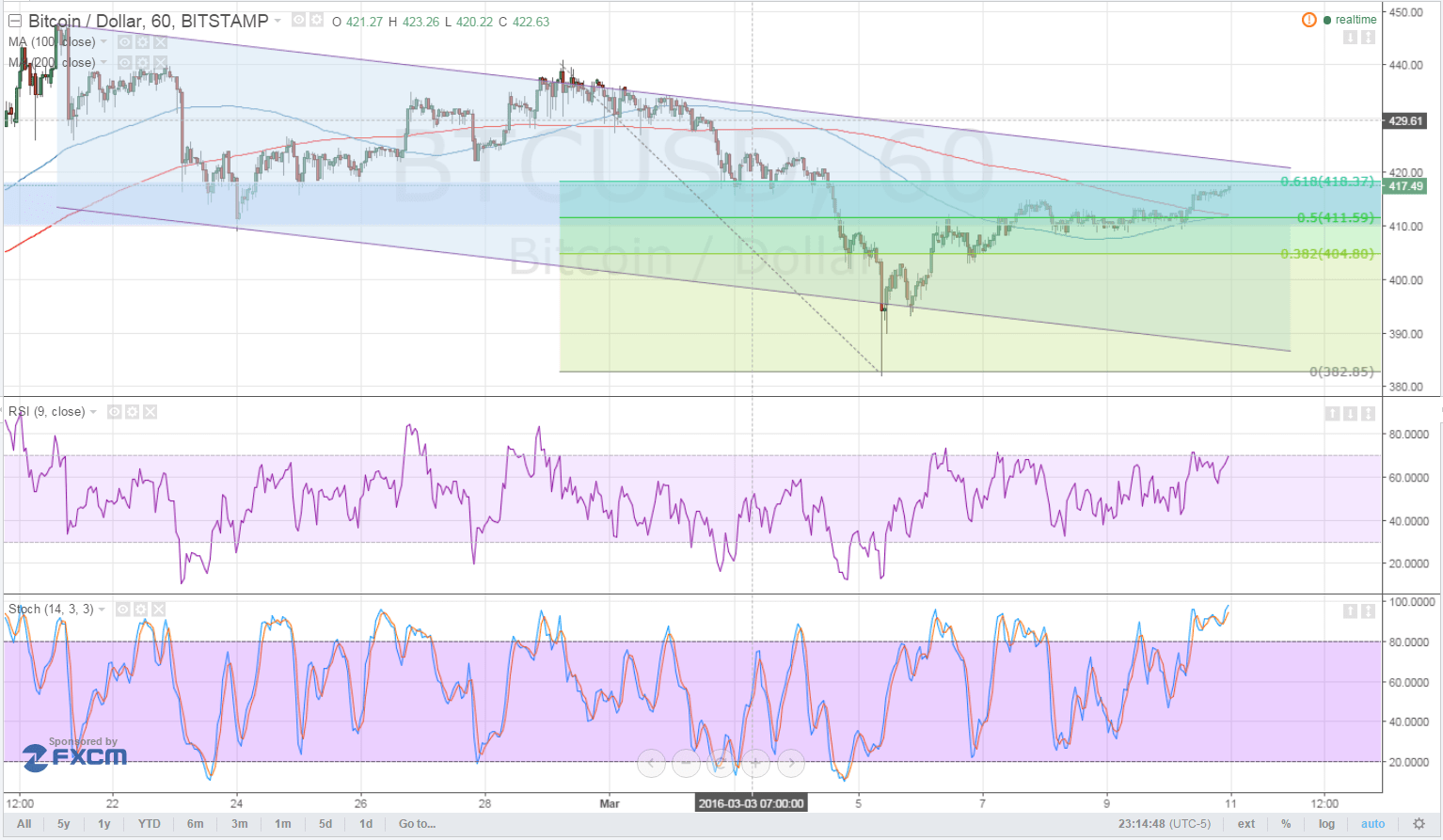 Bitcoin price broke higher from consolidation but might be set to encounter strong resistance at the top of the descending channel and 61.8% Fib.

Although upside breakouts from tight consolidation are usually indicative of prolonged rallies, bitcoin price could encounter a roadblock on its climb at the confluence of levels around $420. This lines up with the descending channel resistance, former support and area of interest, and the 61.8% Fibonacci retracement level based on the latest swing high and low.

In addition, oscillators are hinting at a return in bearish momentum. Stochastic is already in the overbought level but hasn’t turned lower yet, indicating that buying pressure is exhausted and that sellers might jump in sooner or later. Meanwhile, RSI is still on the move up so buyers might still be in control but is nearing the overbought zone.

The moving averages, on the other hand, are suggesting that a reversal may be imminent. The 100 SMA is attempting to cross above the 200 SMA to indicate that the path of least resistance is to the upside. But if this crossover isn’t completed, sellers still have a chance to take the upper hand and push bitcoin price back down to the $380 lows near the channel bottom.

The biggest catalyst for price action recently has been the ECB statement. The European Central Bank ramped up their stimulus program by announcing several rate cuts and an expansion of their monthly asset purchases from 60 billion EUR to 80 billion EUR.

This announcement was welcomed positively by European and US equities, as investors anticipated easier credit conditions for both businesses and consumers. Even though ECB Governor Draghi’s comments during the press conference triggered a reversal for euro pairs, bitcoin price managed to hold on to its gains since the lower-yielding US dollar was much weaker then.

Crude oil declines put a bit of a dent on market sentiment, as word on the street is that Iran might not participate in the upcoming talks, limiting the potential effect of a proposed production cap. For today, the Canadian jobs report is the only red flag on deck and might not have such a strong impact on bitcoin price.

Still, with the end of the week approaching, traders might be keen to book profits off their recent trades, forcing bitcoin price to retreat from its recent rally. Chinese data are up for release over the weekend, adding to event risks and potential gaps on Monday’s open. But if the risk-on environment prevails, bitcoin price could attempt to break past the channel resistance onto the next ceiling at $450.