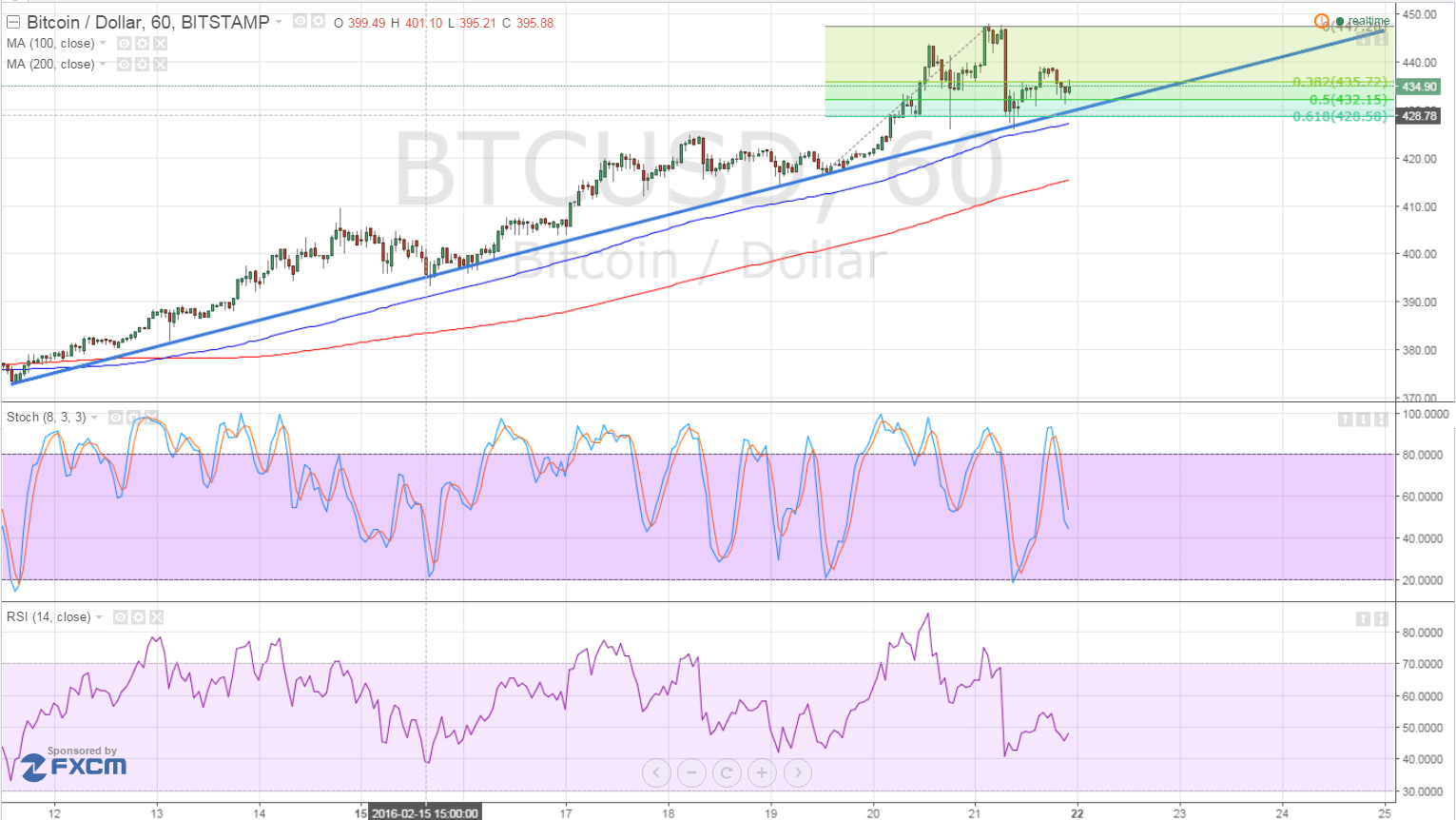 Bitcoin price is once again testing the rising trend line support and might be due for another bounce to its previous highs and beyond.

Bitcoin price already bounced off the 61.8% Fibonacci retracement level at $428.58 and appears ready to climb to the swing high at $447.94. However, buyers still seem hesitant and are still waiting for more bulls to join the fold.

For now, price is stalling at the 50% Fib at $432.15 and might need another quick test of the trend line, which lines up with the 100 SMA. Speaking of the moving averages, the short-term 100 SMA is still above the longer-term 200 SMA so the uptrend could carry on.

In addition, the moving averages are edging farther apart, reflecting a buildup in buying pressure. In that case, price could have enough momentum to break past the $450 area and zoom up to the next long-term resistance at $465 then to $500.

Stochastic is heading down, however, which suggests that sellers are in control of bitcoin price action for now. RSI is also pointing south but is approaching the oversold levels. Once these oscillators start turning higher, bitcoin price could follow suit.

The US dollar has been weakening against its higher-yielding peers these days as global economic slowdown concerns have been fading. However, a quick bout of profit-taking on Friday may have been responsible for that sharp drop in bitcoin, triggering another pullback to the trend line.

There are no major reports lined up from the US economy this week, which suggests that bitcoin price action could mostly be driven by risk sentiment. Recently, headlines about oil prices and a potential Brexit have been influencing risk flows.

So far, energy officials have been unable to come up with a deal to freeze production, especially since an Iranian official confirmed that they had been able to boost output levels by 500,000 barrels per day as promised after the Western sanctions were lifted earlier this year.

More reports on additional meetings to be held this week could continue to keep hopes up for a price bounce, allowing bitcoin price to hold on to its gains as well. On the other hand, lower odds of a production cap could force commodities and cryptocurrencies to retreat.