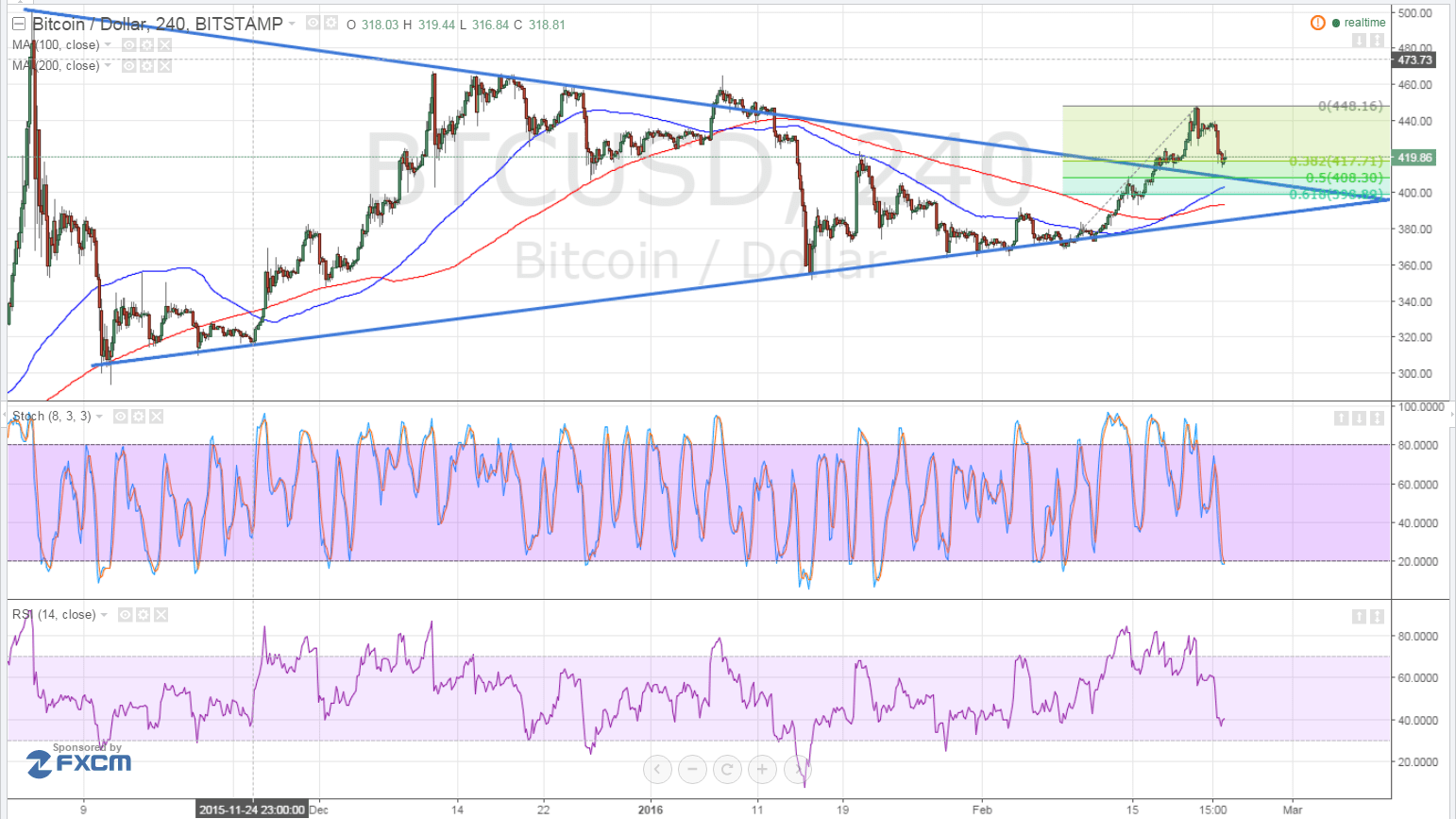 Bitcoin price might be able to resume its uptrend once it finds more support at the Fibonacci retracement levels.

Speaking of moving averages, the 100 SMA recently made an upward crossover from the 200 SMA, indicating that the path of least resistance is to the upside. This confirms that the uptrend is likely to carry on, probably taking bitcoin price back up to the latest highs at $450 or beyond.

RSI is on the move down but is closing in on the oversold area, which would indicate a drop in bearish pressure. Stochastic is also nearing the oversold levels so it’s likely that sellers would need to take it easy soon. If so, buyers could take over and allow the climb to resume.

However, continued bearish momentum could lead to a break below the Fibs, with a move below $400 likely to show that further declines are possible. The next potential floor in this case is at the bottom of the triangle or $380.

Risk aversion has weighed on bitcoin price yesterday, fueled by the decline in commodity prices. Crude oil suffered another selloff when oil ministers from Iran and Saudi Arabia expressed hesitation to curb production. According to Iran’s oil minister, the plan to freeze output is “unrealistic” and “laughable” while Saudi’s oil minister reiterated that they won’t lower production levels.

Meanwhile, the US dollar drew support from this risk-off flows in the market, also driven partly by Brexit fears. A split from the EU could mean more economic challenges from both the UK and the euro zone, worsening fears of a global slowdown stemming from China and the emerging markets.

Data from the US came in mixed but wasn’t enough to weigh on dollar demand. The CB consumer confidence index showed a drop in optimism but existing home sales remained robust and beat expectations. New home sales and crude oil inventories data are due today, with the latter likely to have a stronger impact on dollar movement and market sentiment.

Bitcoin price could be in for a bounce if risk appetite returns to the markets, although it’s hard to imagine a scenario which could spur demand for higher-yielding assets at this point. Stronger market moves could be in the cards during the release of the US preliminary GDP reading on Friday.