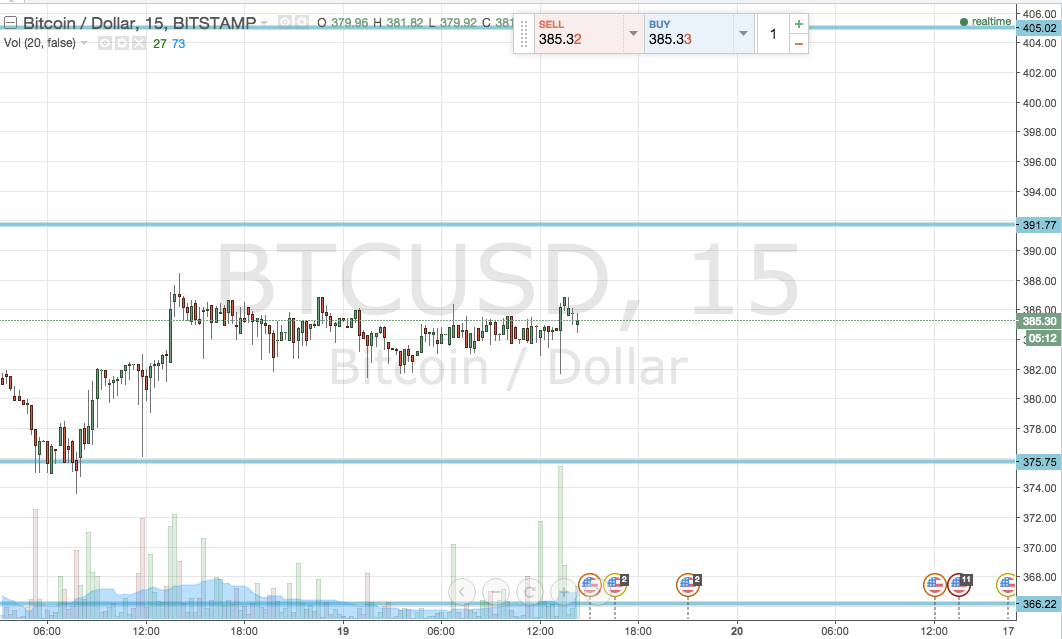 It’s been a strange twenty-four hours in the bitcoin space. The fallout from the Mike Hearn debacle looks to have left the entire sector in a mode of uncertainty, and as bitcoiners wait to see how things play out, the bitcoin price is reflecting this uncertainty. Action over the last couple of days is reminiscent of the way other (more traditional) financial asset markets approach a macroeconomic event. Take a look at the action in the EURUSD over the last two ears for example, during the three or four days preceding a day on which markets expect the Federal Reserve in the US, or the ECB in Europe, to raise rates, or announce a pull back of quantitative easing programs. Similarly, and on a more condensed timeframe, check out the intraday action in the forex markets on any USD pair on the Thursday that precedes the first Friday of every month – non farm payroll day.  Essentially we see a consolidation of bears and bulls, and a real tight range within which price is contained. Technical charting theory attributes this to a couple of things. First, that through the nature of uncertainty, there is a similar number of short and long positions in the market. Second, the rest of the market doesn’t want to take a position before a breakout that indicates a resolution of the deadlock.

As we head into Tuesday’s European close (we’re about one hour short of it at the moment), we fall into the latter category of this attribution. Our breakout strategy affords us the luxury of setting up our positions against exactly this sort of action, with the goal of profiting from action in either direction. We don’t need to form a bias, which is lucky because fundamentally bitcoin is all over the place right now. Common sense suggests strength, but market sentiment is weak and a short spike could quickly turn into a sustained sell off. All we’ve got to do is outline our approach and wait. Price will tell us when to enter and exit, and if we set up right, we should exit with at least a few dollars’ profit per unit traded.

So, that’s where things stand, let’s get to the action. Take a quick look at the chart below to get an idea of the predefined range we are keeping an eye on this afternoon, and beyond, into the Asian session tonight.

As the chart illustrates, the range we defined yesterday afternoon remains in place. Theoretically we could tighten it up a little, but that opens us up to a chop out so it’s not that an attractive move. In light of this, in term support comes in at 375.74, while in term resistance sits at 391.77.

Let’s address the downside first. A break below in term support will put us in a short position towards that same target we outlined yesterday, at 366.62. A stop in the region of 378 defines our risk.

Intrarange is not an option today, as action is too tight to give us any firm corrective entries.