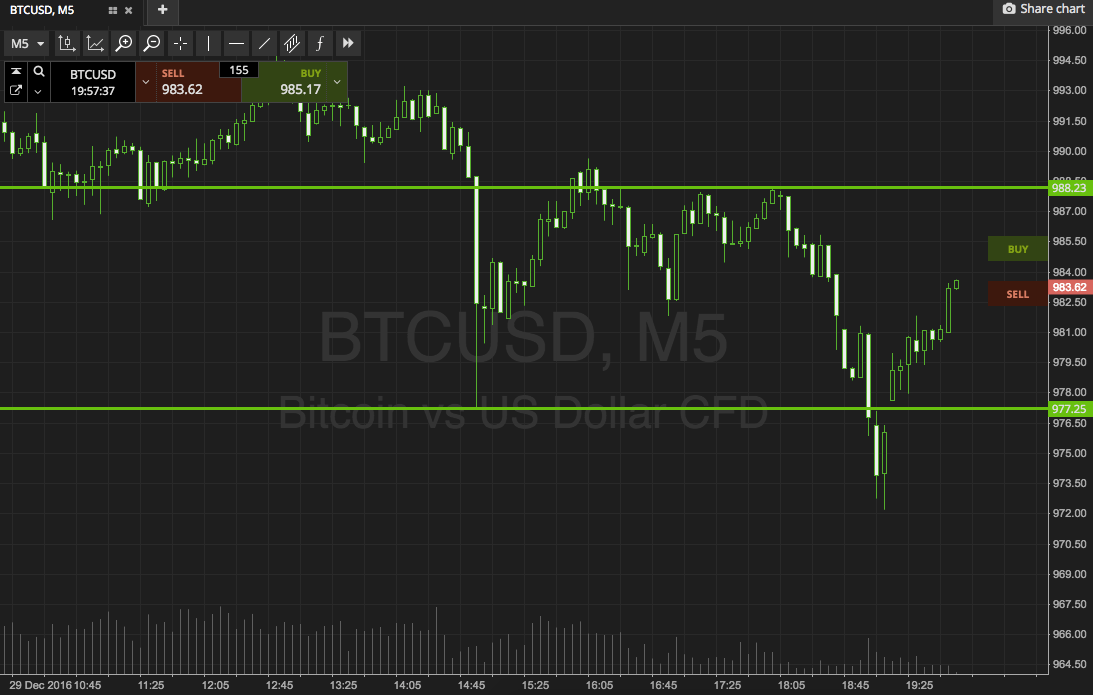 Bitcoin Price Watch; 1,000 Eludes Us, But Not For Long

OK, that’s another day done, and we’re sort of in a similar position right now as we were a few weeks ago, only with price trading $200 higher than at that time. Specifically, we’re waiting for price to hit the round number – last time it was 800, this time it’s four figures at 1,000. We didn’t really get a chance to do the same at 900, because it happened so fast, and looking at action around that level, it’s a shame we didn’t. Not to worry though, we’re good to go on a long trade on the fresh round number target, and we’ve got some nice intrarange targets to go at, so let’s try and put things together going forward.

Before we get going, take a quick look at the chart below. It’s got our range highlighted in green, and there are around twelve hours’ worth of action displayed.

As the chart shows, action today was a little erratic. When we first kicked off the session, price was trading in and around the 990 region. We set 1000 as an upside target on the break, but we obviously haven’t got there just yet. This evening, we’re looking at support to the downside at 977 flat, and resistance to the upside at 988. That’s a little over a ten-dollar range, so for the slightly more aggressive trader, intrarange is an option.

We’re going to stick with breakout, however.

Specifically, if we see a close above in term resistance, we’ll look to get in long towards an immediate upside target of 997. A stop at 984 defines risk. Conversely, a close below support will get us in short towards 970. Again we need a stop loss on the trade so as we can ensure we are taken out of the position in the event that price reverses against us. Somewhere in the region of 985 looks good.