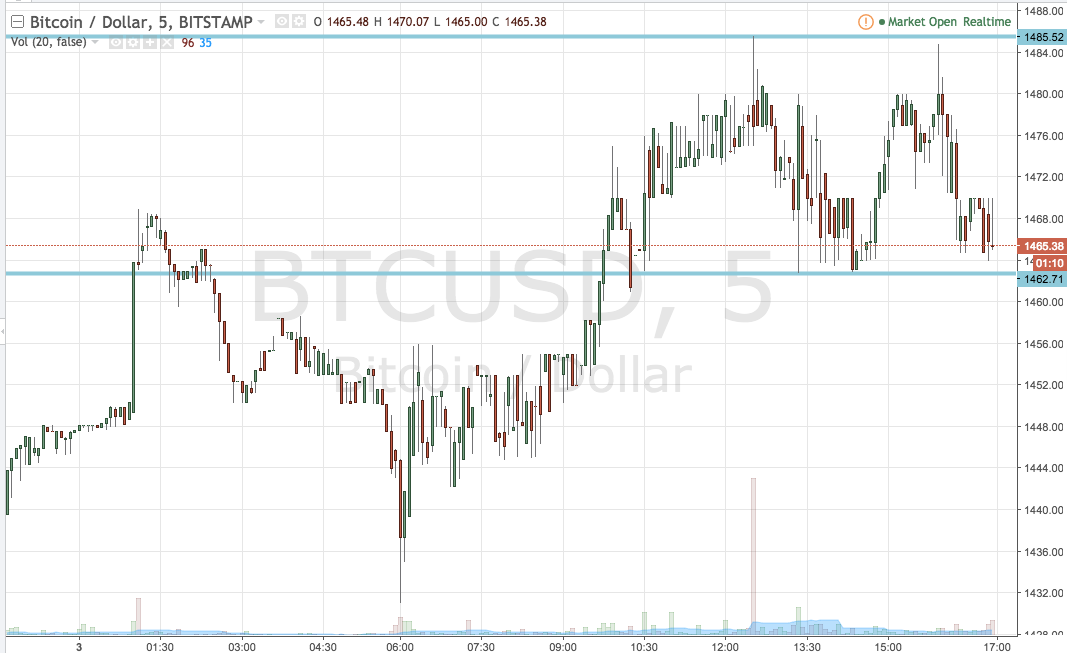 So that’s another day done in our bitcoin trading efforts, and we’ve mainly been executing on our intrarange strategy. For those that caught our analysis earlier today, we targeted support from resistance and resistance form support, respectively, based on the choppy action that we’d seen overnight and into the early morning out of Europe.

It’s done us well so far, but we’re going to shuffle things around for this evening’s session. Action seems to have put in a double top, and this is (potentially) indicative of some near term weakness. We say potentially because these sorts of patterns (double tops, etc.) are often much more reliable on the longer term charts than they are on the five minute charts we’re using right now.

That said, they still mature to completion more than they don’t, and that edge makes them useful to us.

So, for this evening’s session, we’re going to widen out our range to one that’s a little wider than we incorporate into our standard approach, and use this range to get in and out on both an intrarange approach and a breakout entry.

Take a look at the chart below before we get into the key levels for the session. As noted, it’s a five-minute chart, and it’s got this evening’s range overlaid.

As illustrated on the chart, then, our range for the session tonight is defined by support to the downside at 1462 and resistance to the upside at 1485. Intrarange strategy in a nutshell; long at support, short at resistance, targeting the opposing levels with stops just the other side of the entries.

For our breakout entries, we’ll be in short on a close below support towards 1450. We’ll get in long towards a target of 1500 if we see price break through resistance. Again, stops just the other side of the entries (with a little less room on these than on the intrarange positions) to define risk.