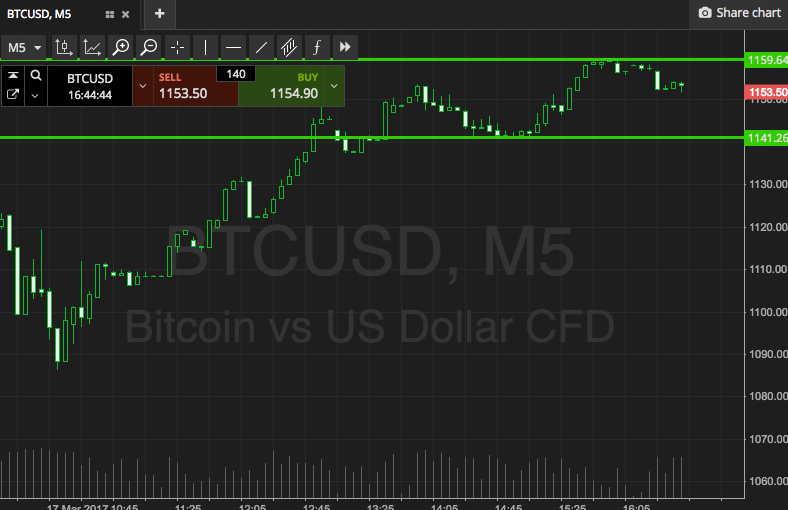 Bitcoin Price Watch; Closing Out The Week On A High

So that is another week out of the way, and it has been a pretty slow one in the bitcoin price. With the ETF decision at the end of last week, and with its implications playing out into early week trading this week, we expected that action might be a little more exciting than it has been. Unfortunately, the decision went against bitcoin, and price has responded accordingly. We say accordingly, this is maybe a little harsh. The bitcoin price did manage to hold its own against what was previously perceived as being a pretty much unsupportable weight of selling pressure, and that’s a good sign for long term stability.

We have long slated 1100 as the level to keep an eye on for long-term support, and last night, this level broke to the downside. Price recovered pretty quickly from below it, however, and reestablished it as been one to keep an eye on during the early morning session.

As action has played out today, it looks as though this level is set to hold for the foreseeable future.

So, as we move into this evening’s session, and beyond into the weekend, what are the levels we are looking at in the bitcoin price, and where are we looking to get in and out of the markets according to the rules of our intraday strategy?

As ever, take a look at the chart below to get an idea of what is on.

As the chart shows, the range we are looking at for this evening is defined by support to the downside at 1141, and resistance to the upside at 1159. If price breaks through resistance, we are going to look for a close above that level to validate a short term upside entry towards a target of 1170. Conversely, a close below support will put us in short towards 1130. A stop loss on both entries works to define risk.