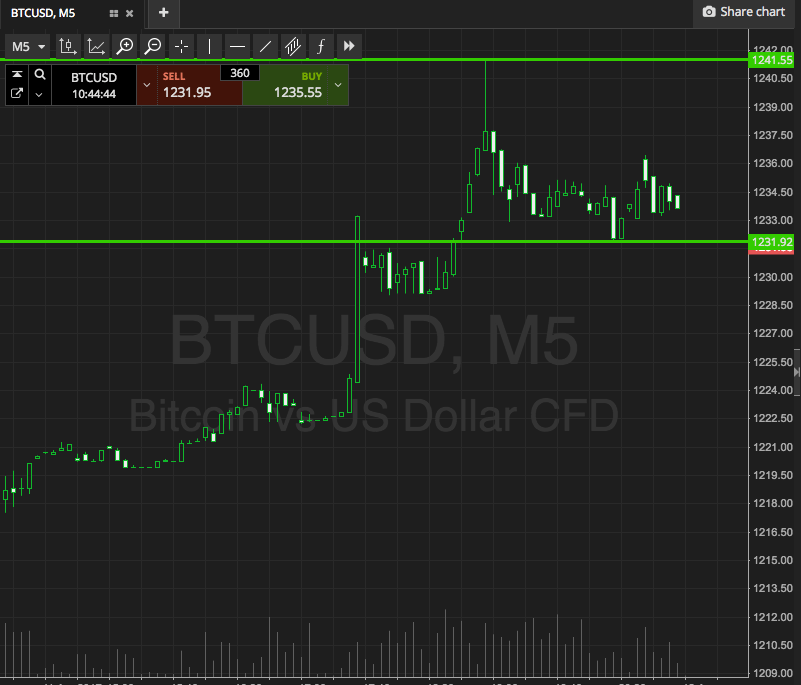 Last night we had to widen out our time frame (and our range) on the back of the action we had seen during the day, in an attempt to accommodate the volatility. Everything was a little bit hit and miss. We saw price gap down considerably during the session, and this led us to a break of the 1200 level that we had long been watching as potentially serving as strong support. With the break in place, the integrity of the 1100-1200 region came in to question, and our long term bullish bias negated somewhat.

Fortunately, overnight on Thursday, things seem to have settled down a little. We mentioned yesterday morning (wrongly, as it turns out) that we might see some degree of low volume action over the Easter weekend. We’re going to stick with this suggestion, but carry it forward twenty-four hours. In other words, we are now looking for said bearish action to come in to play during today’s session, and carry through to the weekend.

Whatever happens, we’ll be ready.

As a side note, we’re going to stick with our fifteen-minute timeframe for the session going forward. It means we’ve got to accept a touch more risk, but it means we’ll be able to get in on any breakout action as and when it comes, and stay in it for some sustained momentum plays.

So, take a quick look at the chart below to get an idea of what we’re looking at today.

As the chart shows, the range we’re going for this morning is defined by support to the downside at 1192, and resistance at 1204. It’s a sort of 1200 key level straddle setup.

So, a close above resistance will get us in long towards 1215. Conversely, a close below support and we’ll be in towards an immediate downside target of 1182. Stops just the other side of entries define risk nicely.