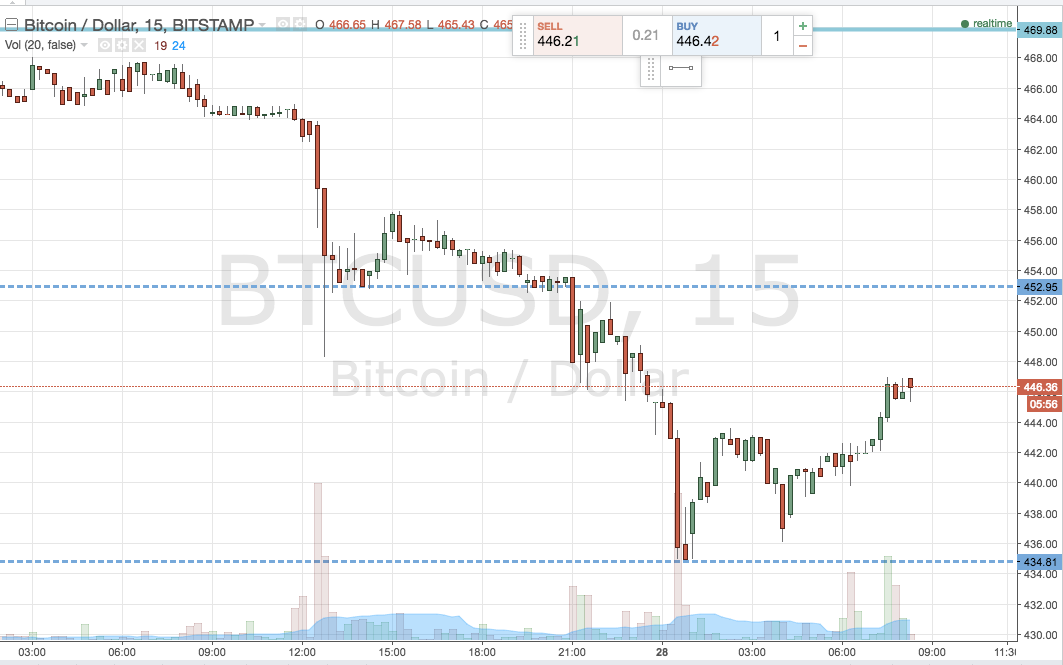 Just as we did last night, let’s kick things off with a chart. The chart below shows action in the bitcoin price across the last 48 hours or so, and has the levels that we outlined  last night being the ones to watch still overlaid.

As you can see from the chart, having picked up strength throughout the majority of the week so far, bitcoin looks as though it is going to be heading to the close of the week down on its opening. Overnight saw a considerable and sustained sell off, and price carved out fresh weekly lows at just ahead of 436. Action over the last couple of hours has corrected this decline slightly, and we now trade just shy of 448. Whether this correction is just a short-term correction of what has become an overarching bearish reversal remains to be seen, but we will probably find out during today’s session. So, with this in mind, what are we looking to trade in the bitcoin price as we head into Thursday morning in Europe, and where will we look to get in and out the markets if price offers up a continuation of the volatility going forward? Take a quick look at the chart below to get an idea of our revised range.

As the chart shows, we are lowering support to the downside at 434.81, and bringing resistance to 453 flat to the upside.

There’s plenty of room for intrarange action with these parameters, so standard long at support and short on a correction from resistance, with a stop just the other side of the entry to define risk.

Looking at a breakout approach, a close above resistance signals along towards 470 flat, while a close below support signals shorts towards 425. Stop losses at 448 and 438 respectively keep things tight from a risk perspective.