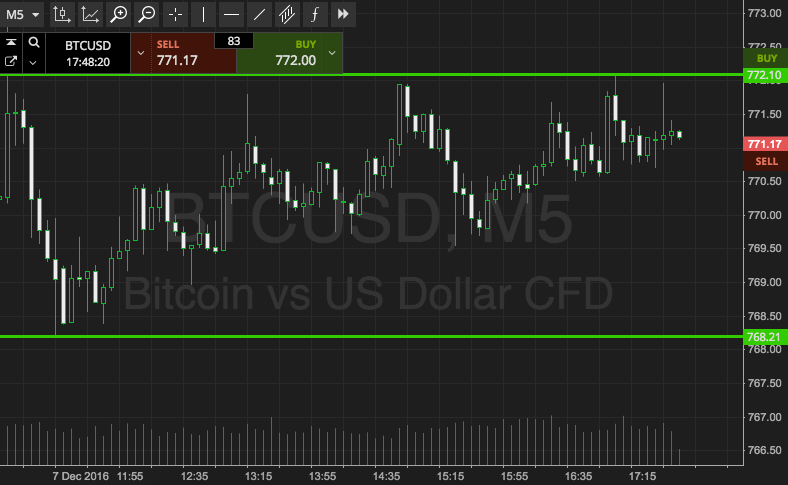 Another day done, and another opportunity to pick up some profit from the bitcoin price and its associated volatility out of the way. There wasn’t any particularly volatile action during the session, and things remained within our predetermined range, which meant it was tough to get in to any trades mid session. Intrarange was off the table based initially, but we brought it in to play half way thorough the morning session, targeting a reversal towards support on a resistance correction. Didn’t happen that way, and we’re now flat to the market, poised to get in on any breakouts that happen during this evening’s session.

So, with this in mind, and as we move forward into the US afternoon and beyond, let’s take a look at what we’re going for, and where we are going to look at getting in and out of the markets according to our intraday strategy moving forward.

As ever, take a quick look at the chart below to get an idea of where we are going with things this evening. It’s a five-minute candlestick chart with our range overlaid, and it shows somewhere in the region of the last twelve hours’ worth of action in the bitcoin price.

So, as the chart shows, the range in question is defined by in term support to the downside at 768 and in term resistance to the upside at 772. It’s a relatively tight range, but we’re still going to try and bring our intrarange strategy in to play. Long at support, short on a correction from resistance.

On the breakout side of the strategy, if we see price close above resistance, we will look to get in long towards an immediate upside target of 780. A close below support, on the other hand, will get us in short towards 768.

Let’s see how nice action is to us this evening…