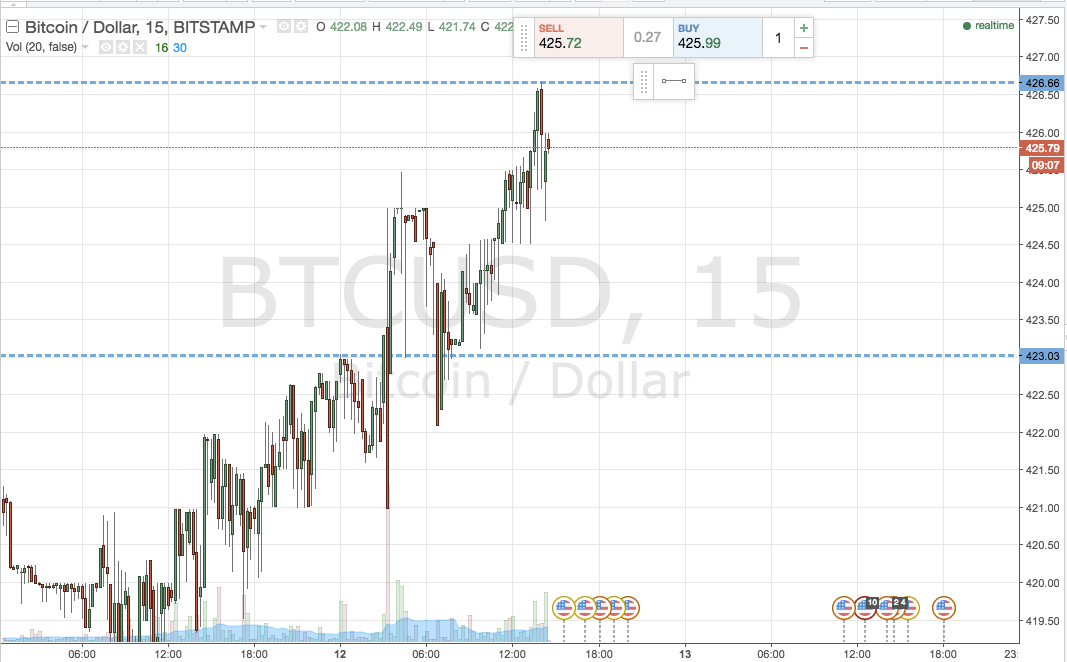 In the first of today’s bitcoin price watch analyses, published this morning, we noted that the levels we were watching – i.e. those that would define the range for today’s morning session, had widened a little, and that as a result, we were able to bring our intrarange strategy in to play. It’s been a while since that’s been the case (simply because the action seen over the last week or so has been too tight to define a wide enough range). As it turns out, we only really needed to apply a breakout framework, as the volatility that has been so lacking as late, is back with us.

Earlier today the bitcoin price broke through our range’s in term resistance (after, we should probably note, correcting to pretty much support from intraday highs) and put us in a long position towards an initial upside target of 430 flat. We’ve been targeting the levels just shy of 430 for the last week or so, with a number of trades putting us long towards 427, 428 and so on, and so the 430 target was a bit of a stretch. We’ve not reached it yet (action is hovering just ahead of broken resistance) but with a decent kick we should see a run towards it.

With this in mind, we wont be getting in to any fresh trades, at least not until this one resolves.

For those not yet active, however, the chart below details the levels to keep an eye on as we head into the evening session.

As the chart shows, in term resistance raises to 426.66, while in term support also raises a little to 423 flat.

A close above resistance will signal a long entry towards 431, with a stop at 425 flat keeping our risk tight.

Looking short, a close below support will signal short towards 418 flat, with a stop on this one somewhere in the region of 424.5.