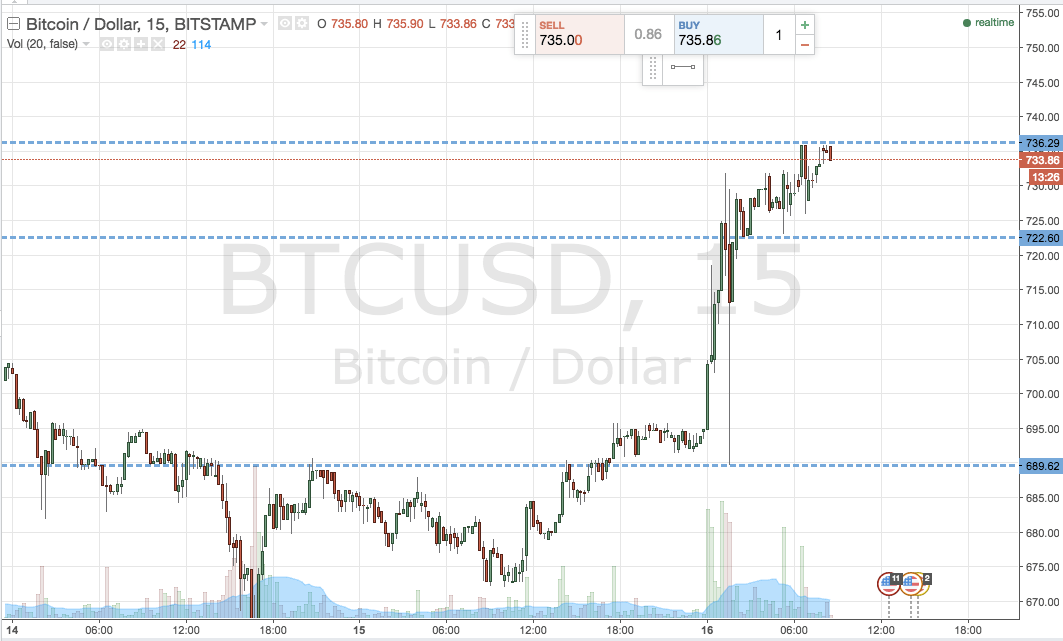 In yesterday evening’s analysis, we focused on the relatively flat action we have seen in the bitcoin price across the last few days, and commented that this might continue as we head into the close of the week. As things have turned out, we’ve seen the opposite happen overnight. Last night, as the Asian session kicked off, the bitcoin price rose sharply in what amounts to an almost mirror image of the action seen over the weekend, and topped out just shy of 750. A correction has brought things down to trade a little bit lower (circa 735 at last count), but we still remain in fresh high territory, and look set for further gains as we head into the final 48 hours of this week. Of course, last time this happened, we got a pretty severe correction towards the end of teh day. Whether this will happen again today remains to be seen, but what happens, we are going to set up against both sides of the market in an attempt to draw profit from any more volatility.

So, with this said, and as we head into today’s session, here is a look at what we are focusing on in the bitcoin price, and a look at where we will look to get in and out of the markets according to our intraday strategy. As ever, take a quick look at the chart below to get an idea of what’s on.

As the chart shows, today’s rang in focus is defined by support at 722 to the downside, and resistance at 736 to the upside. Intrarange is on, so long at support and short at resistance with a stop just the other side of the entry to define risk. From a breakout perspective, a close above resistance signals long towards 745. A close below support signals short toward 710. Again, a stop loss just the other side of each entry manages our downside risk on the trade.

Get 110 USDT Futures Bonus for FREE!
Tags: Bitcoin chartbitcoin pricebtcusdtrade bitcoin
Tweet123Share196ShareSend
BitStarz Player Lands $2,459,124 Record Win! Could you be next big winner? Win up to $1,000,000 in One Spin at CryptoSlots