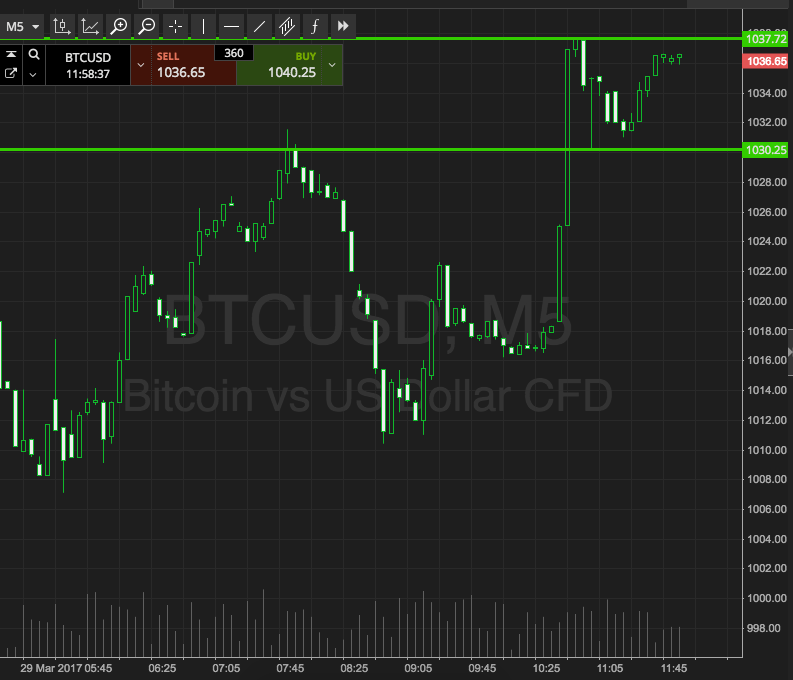 Well we asked for erratic action, and we’ve got some. Price overnight was up and down like a see-saw, breaking in and out of our predefined range and giving us plenty of opportunity to get in and out of the markets on the breaks. We didn’t bring our intrarange strategy to the table last night, and that’s probably a good thing, because chances are we would have gotten chopped out if we’d attempted to get in on an intrarange entry.

Today, we’re looking for more of the same. We’d like to see the bulls get a hold of the bitcoin price during the early start of the session and run up towards the 1100 region. It probably won’t happen, but it would give us an indication that things are starting to reverse longer term after the couple of fundamental hits (and the risk aversion) we’ve seen over the last couple of weeks or so.

So, with that all out of the way, let’s get some levels outlined right now with which we can go at price today, and try and draw a profit from the market on any action. As ever, take a quick look at the chart below to get an idea of what’s on, and where things stand at present. It’s a five-minute candlestick chart and it’s got our key range overlaid in green.

As the chart shows, the range we are going for is defined by support to the downside at 1030 and resistance to the upside at 1037. That’s too tight for us to bring intrarange into play once again, so we’ll just be using breakout for now.