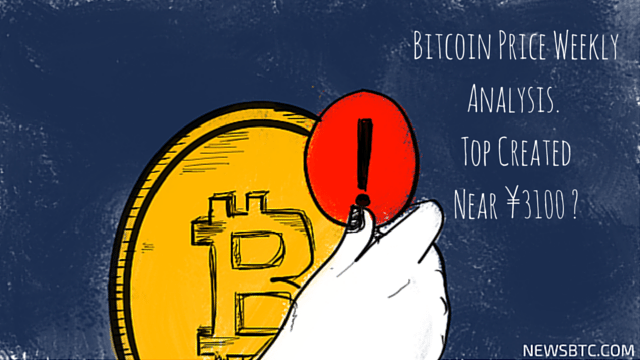 Bitcoin’s price gained heavily this past week, but it looks like a short-term top is created near ¥3100, and there is a chance of a down move during the upcoming week.

Sell with a Break?

Bitcoin’s price continued to trade higher this past week against the Chinese yuan, but it looks like there is a major resistance forming near ¥3100. So, buyers should not rush chasing the price higher, as there is a chance of a break lower. There is a major bullish trend line formed on the 4-hour chart (data feed from BTCChina), which is currently acting as a hurdle for sellers. However, the price is losing momentum, which is an early indicator that it may break down.

A break below the trend line and support area may start a bearish move and take the price lower. In this situation, the price could head towards the 100-hour simple moving average on the 4-hour chart.

When we analyze the hourly chart with the data feed from Huobi, there is another support trend line formed. It looks like the price may break it and trade towards the 38.2% Fibonacci retracement level of the last wave from the ¥2870 low to ¥3100 high.

4H MACD – The moving average convergence divergence is under convergence, and it would be interesting to see if there is a rise in buyer’s sentiment.

4H RSI – The 4-hour relative strength index is above the 50 level with no signs of weakness.