Bitcoin has seen a strong surge over the past three weeks, moving from $11,200 to a high of $15,300. That is a 36.5% gain in the span of twenty days, making it the best-performing asset over that time frame.

While some are expecting a retracement from here, on-chain data shows that the market can sustainably move higher. This counteracts the strong sentiment shared by some commentators that Bitcoin is clearly overextended to the upside.

Bitcoin’s rapid move to the upside has left many wondering if large investors will pay themselves and take profit. There have already been rumors shared on Twitter that certain traders and whale Bitcoin addresses have been liquidating coins in anticipation of a strong correction.

But according to Rafael Schultze-Kraft, CTO of prominent data firm Glassnode, Bitcoin has room to sustainably rally from here. He shared data from his firm showing that the Relative Unrealized Profit of Bitcoin is currently far from bubble levels:

As the chart shows, the last time this metric was this high was in the middle of 2019’s rally, when BTC was trading for $8,000-10,000. The metric holding these lows despite Bitcoin’s price surging higher indicates that BTC will continue higher before serious profit-taking takes place.

There are also expectations that Bitcoin will move dramatically higher, increasing the chance that holders keep their positions open. 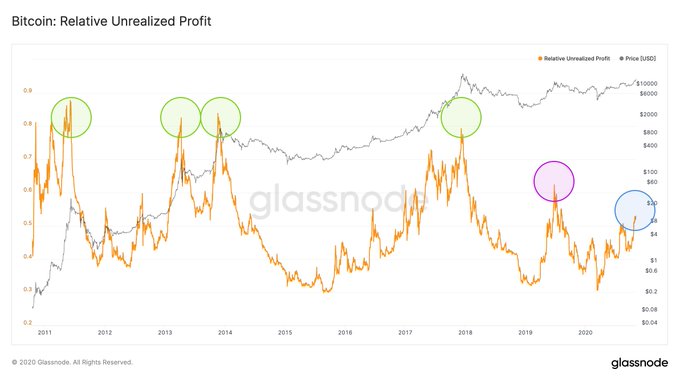 Don’t Count Out a Drawdown or Correction

Analysts say that it would be unwise to count out a drop from here, though, or at least a period of consolidation for Bitcoin.

The chart below was shared by an analyst during Bitcoin’s latest leg higher. It suggests that the cryptocurrency has a good chance of reversing here due to a historical indicator.

Five out of seven of the times Bitcoin has looked as it did in the past ten months, it saw a strong correction.