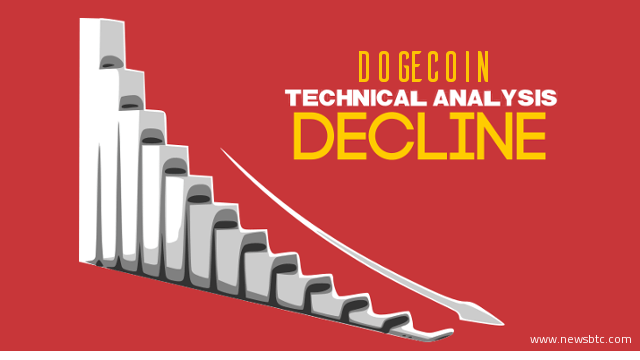 Dogecoin price declined intraday, and it looks like sellers are positioned to take it further lower moving ahead.

Dogecoin price managed to climb a bit yesterday, and breached a major channel resistance area as highlighted in one of the recent analyses. However, there was no real momentum after the break, as the price moved back lower to settle below the 100 hourly simple moving average. One critical point to note is the fact that the price was above a major pivot area of 72.0 Satoshis, but once sellers were in control it was once again breached towards the downside.

The failure was around the 61.8% Fib retracement level of the last drop from 79.0 Satoshis to 58.9 Satoshis. Now, there are two trend line forming. One on the upside, which is coinciding with the mentioned Fib level, and another on the downside sitting with the Lower Bollinger Band. There is a bullish sign, as the hourly RSI is just above the 50 level. However, on the other hand, the MACD is under divergence signaling more losses. So, signals are mixed today, which means either we might witness range trading for some time, or there might be a nasty move in the short term.

On the downside, the recent low of 58.9 Satoshis might continue to provide support, followed by 55.0 Satoshis.

Let us see how the price trades moving ahead, as signals are mixed suggesting trading with caution.