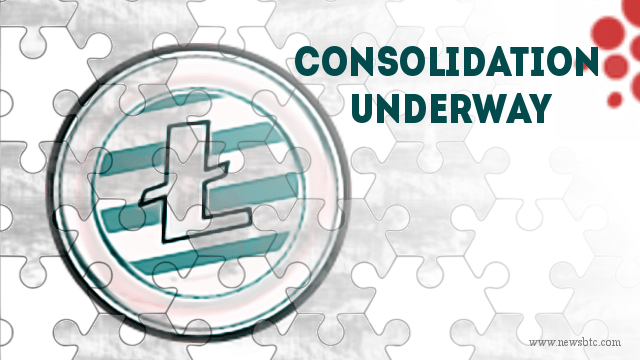 In the previous Litecoin price technical analysis Something Big is Coming!, we touched upon the triangle pattern formation, a breakdown from which is expected to resume the downtrend that the cryptocurrency is in. Litecoin is currently trading at $2.812, barely higher than its previous observation of $2.800.

As Litecoin tests the patience of the market participants for another day, I would advise them to hold tight as an immediate breakout from the pattern is imminent.

Litecoin Chart Structure – Not much has changed in the chart structure except that the range has contracted even further (see the chart above).

Moving Average Convergence Divergence – The downward Signal Line can be seen closing in on the flat MACD, thereby lifting the Histogram. The Histogram has now advanced to -0.0183 while the MACD maintains itself at -0.3235 and the Signal Line drops to -0.3052.

Money Flow Index – The MFI continues to teeter near the oversold boundary with its value of 21.6382.

Relative Strength Index – No change is found in the strength reading which comes in at 31.7346.

A breakout from the triangle pattern, which is a continuation pattern in itself, should see more losses coming for Litecoin. If that does happen, the 200-day SMA of $2.5187 will act as a brief support. My price target for Litecoin for September is $2.000.

But, I must also present a case where I can be proved very wrong. We are seeing a continued upward sustenance in Bitcoin, and if this cryptocurrency breaches $235, expect it to soar to $260. This bullishness will also aid and fuel a strong rise in Litecoin as well.

Overall, I fail to see any strong fundamental indications in both the cryptocurrencies which warrant buying at current levels. But, the speculative force can be very strong in the short term.