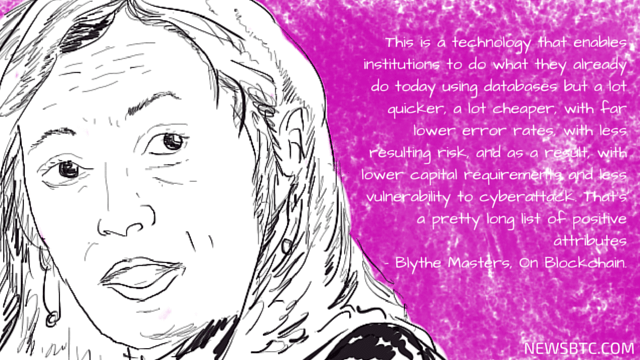 “At its simplest level, a blockchain is nothing much more than a fancy kind of database,” she said. Blockchain refers to the distributed public ledger of bitcoin transactions, verified and stored in a network of computers solving complex algorithms in a process known as bitcoin mining. This technology is currently being studied by large financial institutions for its potential applications in the industry.

“This is a technology that enables institutions to do what they already do today using databases but a lot quicker, a lot cheaper, with far lower error rates, with less resulting risk, and as a result, with lower capital requirements and less vulnerability to cyberattack,” she explained. “That’s a pretty long list of positive attributes.”

With that, blockchain technology has the potential to take over existing database systems, which are still relatively vulnerable to hacking or various forms of cyberattacks. This distributed public ledger is already being tapped for its uses on record-keeping, tracking data transfers, intellectual property rights distribution, and trade settlement among many others.

Masters also emphasized the value of collaboration in this regard, as she said that sharing a record-keeping system among entities could enhance the system’s stability. “If you and I agree to same the same records from inception… we are eradicating that need for post-trade reconcilation and settlement process that is lengthy, time-consuming and expensive,” Masters concluded. “That, in short, is the simplest way to think of how a distributed ledger or a blockchain-type database.”