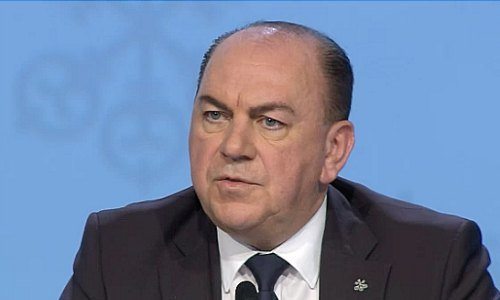 Bundesbank chairman and former President, Axel Weber, became the latest in the recent spate of voices bad-mouthing Bitcoin. Speaking at a conference arranged by the Swiss Finance Institute earlier today, he expressed scepticism over its feasibility for use as a currency:

His sentiment aligns with others in the high-finance industry who have a lot to lose from a bank-less future, based around a global decentralised currency. Last month Jamie Dimon, and Ray Dalio were outspoken about their own scepticism (read: fear) over Bitcoin’s disruptive potential.

It’s not the first time Axel Weber has spoken similarly of cryptocurrency though. Back in 2015, at the Bank of England’s Open Forum he claimed that “private currencies” wouldn’t amount to much “because there is no lender of last resort – there will always be boom and bust.”

Interestingly, at the Swiss Finance Institute earlier today, Weber gave perhaps the most telling insight into his thoughts on cryptocurrency:

I get often asked why I’m so sceptical about bitcoin, it probably comes from my background as a central banker.

Both this time, and in 2015, he did express interest in Blockchain technology. Back then he deemed it a more efficient way to manage transactions, and now claims that a digital ledger would eventually become widely accepted.

This is supported by today’s other news that Commerzbank AG, Bank of Montreal, Erste Group Bank AG and CaixaBank SA have joined a UBS IBM Corp blockchain initiative. The goal is to work on enterprise-level technology for the finance industry. Perhaps if they can quickly package up some form of Bitcoin-bastardisation back end for their own services, they just might buy themselves a few more decades at the top of the food chain.