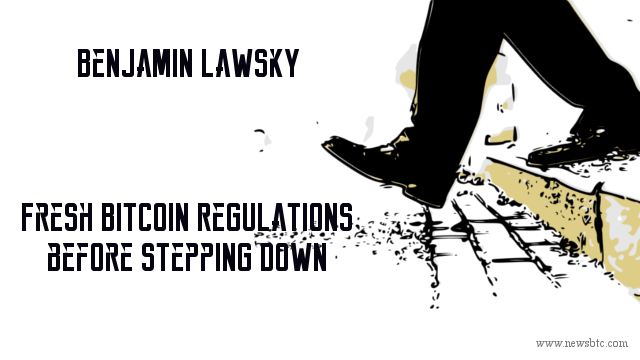 Superintendent of the New York Department of Financial Services (NYDFS), Benjamin Lawsky’s final act will include unveiling of the Bitcoin licensing rules. The regulator, who served four years as the agency’s first superintendent, recently announced that he will step down from the office in late-June but will protect the interests of the customers with the new set of regulations.

According to a WSJ report, Lawsky is planning to present the widely-awaited BitLicense regulations next week. The Bitcoin community is expecting Benjamin Lawsky’s version of BitLicense to stifle innovations and make it extremely tight for Bitcoin businesses to run their operations.

Central banks have been raising concerns regarding the widespread adoption of the anonymous, decentralized virtual currencies. Due to the untraceable nature of these digital currencies, criminals have started adopting them for money laundering and cyber crimes. Recently, there has been a spate of cyber crimes involving Bitcoin in ransom payouts.

Benjamin Lawsky, who has proved to be a tough taskmaster against the fintech industry, is anticipated to tighten the noose on Bitcoin businesses and trading activities involving Bitcoin with his version of the regulatory framework.

Bitcoin advocates say increased overseeing and choking, unclear regulations will only act as barriers to the technological developments that the Bitcoin technology has to offer. A stricter regulatory framework is simply against the fundamental, decentralized nature of the digital currencies. Some also argue that high compliance costs will also act as a deterrent to new entrants and possible investments, thereby severely limiting the growth of the high-potential, disruptive technology.

Lawsky, however, maintains that the fears surrounding the regulations are blown out of proportion, and that the regulatory body is in no way against the technological innovations.

“We make it crystal clear that we are not going to regulate software providers or software creators or people doing code,” he said. “The MIT student has nothing to worry about. We are only regulating financial intermediaries.”

Tags: Benjamin LawskybitcoinbitlicenseNewsOtherregulations
Tweet123Share196ShareSend
BitStarz Player Lands $2,459,124 Record Win! Could you be next big winner? Win up to $1,000,000 in One Spin at CryptoSlots