After a brutal Q4 2018, Bitcoin Cash (BCH) recovery in 2019 was spectacular. However, May’s hard fork and an undesired 51 percent attack was a stain, but a necessary intervention. In a retest, BCH is retracing and could fall back to $230 in a bear trend continuation.

Within the blockchain circles, nothing is as dreaded as a Majority Attack. Better known as a 51 percent attack, this rare assault happens when a miner, or a mining pool, take charge, commandeering more than 50 percent of the network’s hash-rate.

With this newfound power, the individual or the group can rewrite the history of the ledger’s transactions, literally breaking the system. While it is costly to unleash, the “attack” happened to the Bitcoin Cash network mid last month.

Ostensibly done for the general good of the Bitcoin Cash community, two of the largest BCH mining pools joined hands to reverse an illegal transaction by a miner. The unknown miner was taking advantage of a bug that was unrelated to the upgrade to try and steal funds forcing BTC.com and BTC.top to step in.

Although this was unwanted, reviving questions related to decentralization within Roger Ver’s Bitcoin Cash, supporters as Jonathan Silverblood argue that it was a necessary intervention:

“This is a very unfortunate situation, but it is also what proof of work actually is. The miners, in this case, did choose to drop prohashes block and from what I heard, it is because they deemed a transaction within it to have been invalid.” 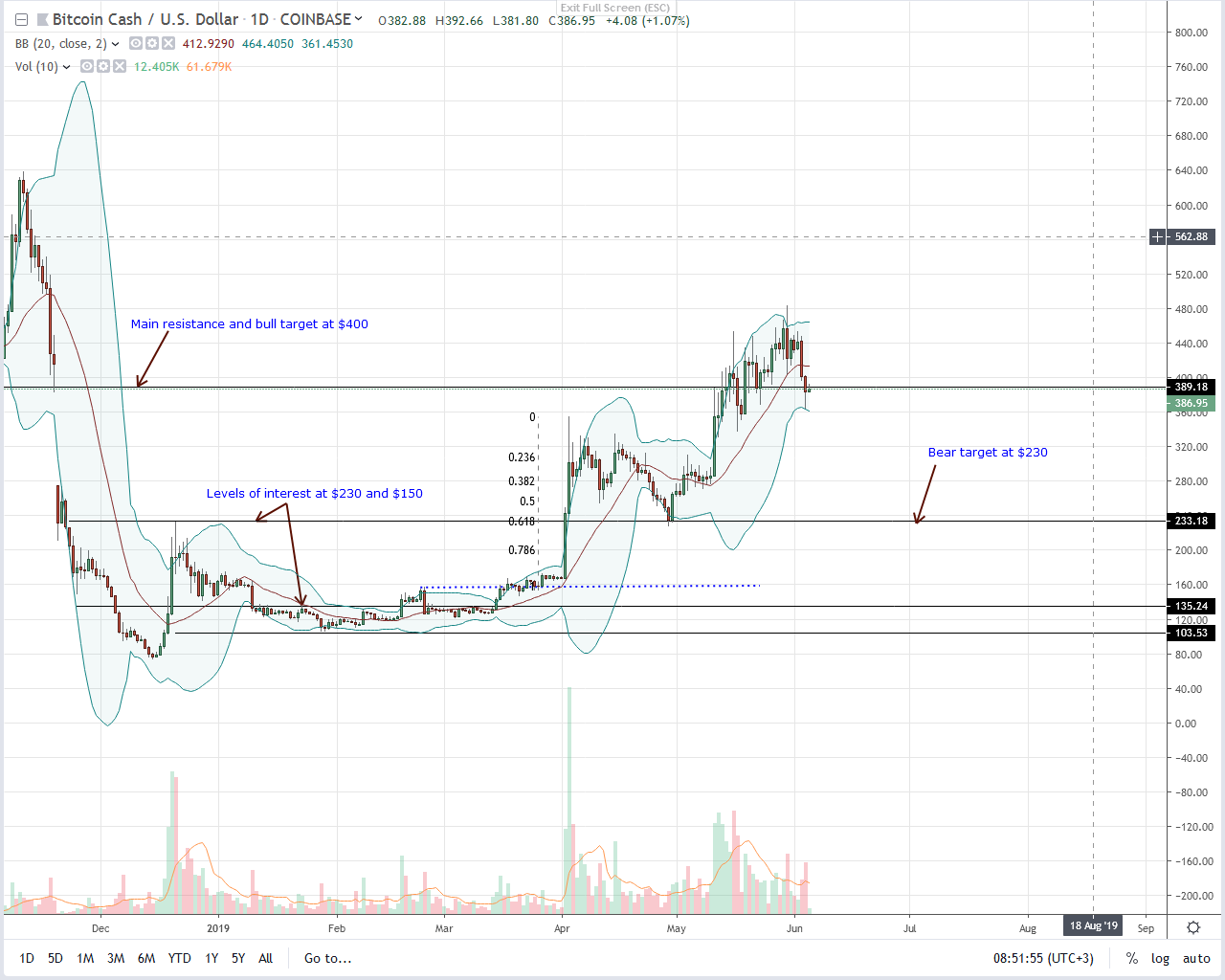 After free-falling for the better part of last year, Bitcoin Cash (BCH) performance during the previous five months has been impressive. Not only did bulls take charge, erasing losses of Q4 2018 but what we have in the daily chart is a classic retest of previous support now resistance.

What is visible is that the rally from $70 was at the back of high trading volumes helping in propelling prices back to $400. However, the failure of buyers to drum up momentum towards $600 or higher constitutes a retest.

Typical of a breakout pattern, the completion of the retest phase ushers in the third stage, the trend continuation. That is what is currently in progress and activation could see BCH tumble to $230 or the 61.8 percent Fibonacci retracement level of March and April trade range.

Since BCH is below the middle BB, May 19th bull candlestick anchors this trade plan. It has above average trading volumes of 122k and wide-ranging. Any break below $350 at the back of high participation could see BCH collapse to $230 as aforementioned.