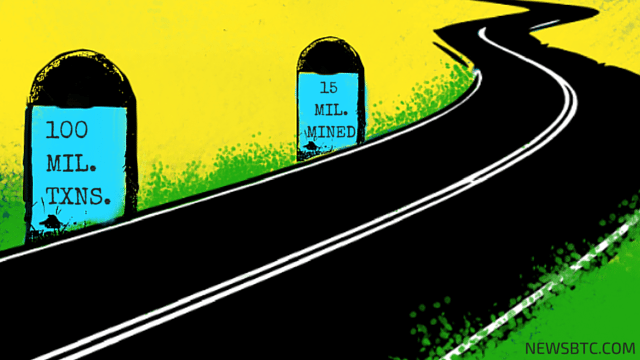 Bitcoin has reached a new technological milestone today. Since its birth in 2008, 15 million bitcoins has been mined, more than 100 million transactions have been settled by the Bitcoin network and mining difficulty is close to reaching 100 billion.

According to the statistics provided by blockchain.info, the mining difficulty has risen by nearly 250% since January of 2015, recording the fastest annual increase of difficulty since 2008.

The number of transactions processed by the Bitcoin network have reached 100 million, as the number of daily bitcoin transactions increased by five times since January of 2015. Bitcoin experts predict that the worldwide recognition of bitcoin and established financial institutions’ growing interest towards Bitcoin and the Bitcoin blockchain technology network have played a vital role in the growth of Bitcoin as a currency and as a technological protocol.

The market cap of Bitcoin has also reached a yearly high at around US$6.34 billion and is close to recovering from its decline in 2014, amid the collapse of then the largest bitcoin exchange Mt. Gox.

Bitcoin, which has had one of its best year since 2013 also surpassed the growth of major reserve currencies and top-performing developing currencies such as the Malaysian Ringgit. Bitcoin has also performed exceptionally well against the world’s largest currencies including pound sterling, US dollars and Japanese yen, becoming the world’s best performing currency of the year.

Although financial experts argue the value of Bitcoin and criticize its independence (decentralized nature), bitcoin is beginning to be recognized as an independent currency by an increasing number of central banks and financial establishments around the world.

Bitcoin since 2014, has almost fully recovered from its slump following the Mt. Gox heist and all the negativity portrayed by media outlets and news networks around the world.

Continuing this success, in 2016, bitcoin experts predict that bitcoin will reach another milestone as a developing currency.