Bitcoin Price Breaks the $300 Mark! Will it Keep on Rising? 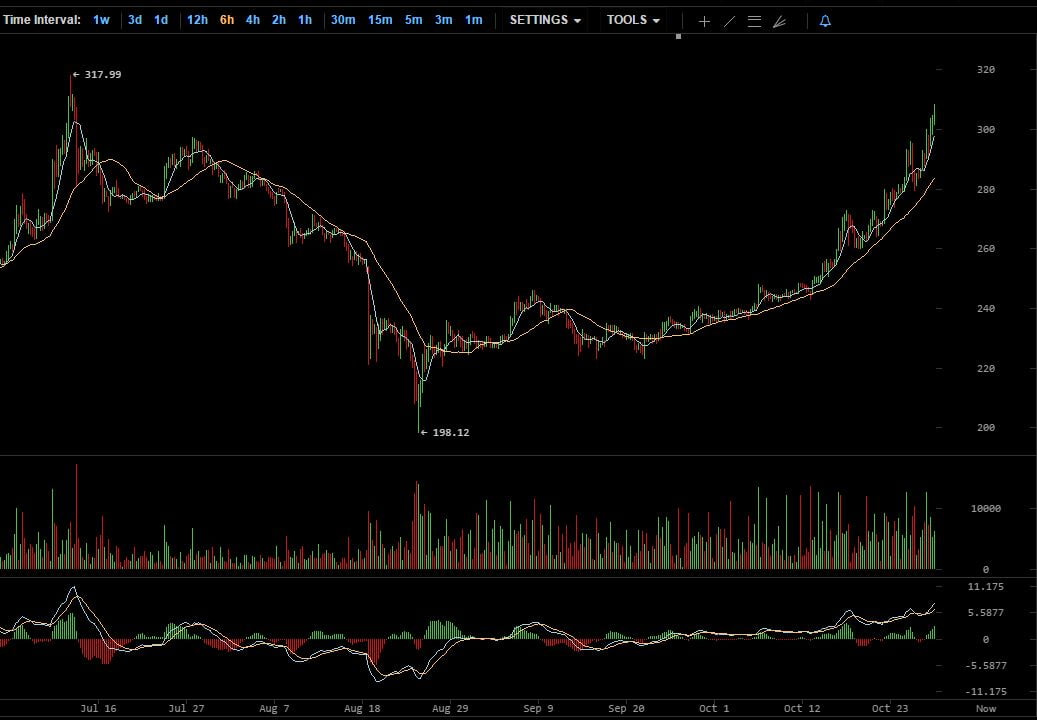 Yesterday, the 27th of October, the Bitcoin price broke the $300 barrier. For some weeks now, we have seen a positive advance in the bitcoin price. Many are the reasons pointed by experts and traders for this price rise, however between lots of explanations there is still heavy doubts on what it could be the real trigger for this continued price rise.

Since the middle of September, the price has been slowly and steadily rising and it already stumbled upon a more than 30% increase. The last time the bitcoin price touched the $300 barrier was back in July the 12th when the bitcoin price hit about $317. After that, the market tumbled down to about $199 in August the 25th.

Since the last dump, there has been a steady increase on the price. From a bottom of $199 the price raised to $304.82 at the time of writing.

As a lot of orders are waiting to be filled right above the $305 mark, based on what happened before, we might see a new set back on the price again. Many believe the market will go back under the $300 before continuing the steady rise. Comparing with the past year, the price is still lower than the same period, however in 2014 the price was steadily falling rather than rising.

Why this steady increase?

Many of you are surely wondering what could be the main reasons leading to this steady price increase. Several answers and explanations can be found throughout social networks, articles and other posts in blog sites. Some point out the recent VAT ruling in Europe, other say it could be the influence of Chinese traders buying large amounts of bitcoin, fearing an increased government currency control, while others point the coming bitcoin halving which is nearing at a fast pace. So it might be possible for us to see the price continue to rise.

All these facts put together, along with the increased interest and heavy investments from international companies in bitcoin and the Blockchain technology throughout 2015 are certainly responsible for the progressive price rise.