Bitcoin Price Watch; Back On Track For Strength 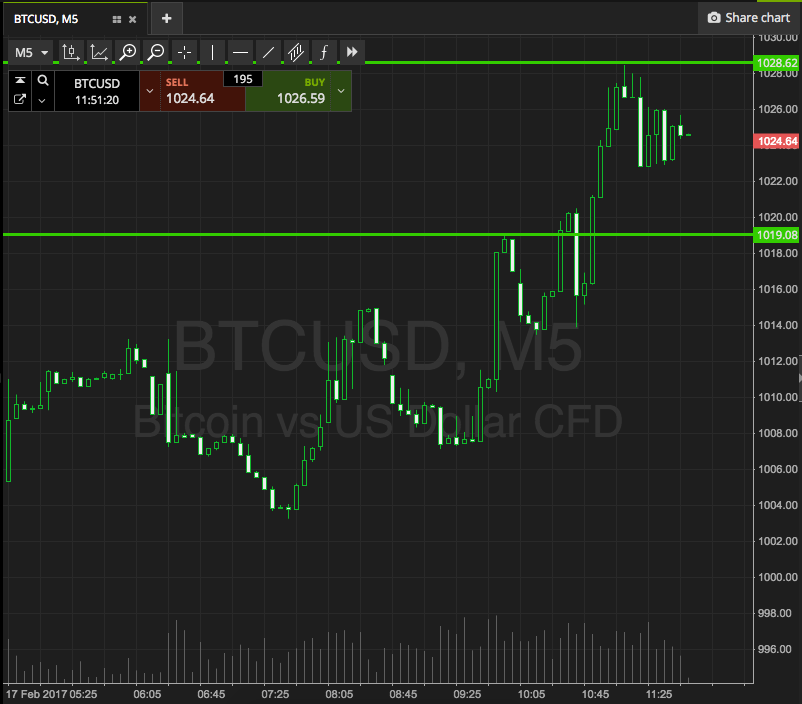 Well, here we go – another week pretty much done and just a single session left before we close out for the weekend. It’s been a bit of a strange one. The bitcoin price started out pretty much flat on the week, trading below the 1000 threshold that we waited so long for it to break towards the end of last year. Many claimed that the run through to 1300 seen in January was a bit of a fluke run, and that it was hysteria supported. To a degree, it probably was, but towards the end of this week, price has broken back through the 1000 threshold, and it looks as though things are back on track for some strength.

If the are, and if we can set up correct against today’s session, then we may be able to pull a profit or two from the markets heading into the weekend.

So, with this noted, let’s get some levels outlined for the session this morning, and see if we can put forward some areas of focus for the European morning initially, and then a little later on we will try and refine these (in response to any action throughout Europe) ahead of the US afternoon.

As ever, take a quick look at the chart below to get an idea of what’s on, and where things stand.

As the chart shows, the range we are looking at for this morning is defined by resistance to the upside at 1028 flat, and support to the downside at 1019. Just breakout for now, because this range is a little too tight for us to target an intrarange strategy.

So, a close above resistance will get us in a long entry towards 1038. Conversely, a close below support will put us in short toward 1010. Stop losses just the other side of our entry on both positions will take us out if price reverses.