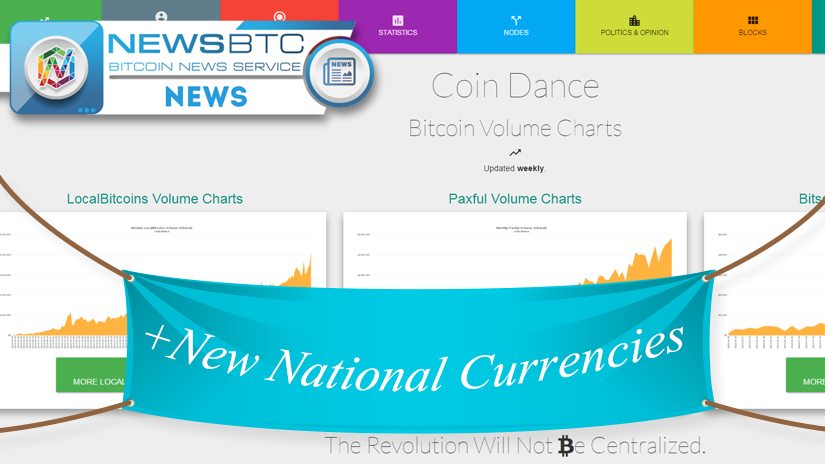 A lot of people rely on the Coin Dance charts to check weekly bitcoin trading volumes. The platform tracks LocalBitcoins, Paxful, and BitSquare traders all over the world. In the most recent update, various new national currencies were added for all supported platforms. This change will give cryptocurrency enthusiasts a better overview of how things are developing in specific regions.

Adding more national currencies to track for bitcoin trading volumes is a great move by Coin Dance. LocalBitcoins trades are the most popular as far as charts go on the platform. Enthusiasts can now track trades in 8 new different national currencies. The addition of the Naira is quite intriguing, as it goes to show the country is generating a ton of value. Then again, this is mostly due to the MMM Global Ponzi Scheme, which only accepts bitcoin deposits in Nigeria.

Tracking Bitcoin Trades In More National Currencies Than Before

Other interesting countries to keep an eye on are Peru, Vietnam, and Indonesia. All of these regions can benefit from bitcoin adoption in one way or another. While it remains to be seen if bitcoin trades on LocalBitcoins can impact these economies, it is good to have more information at our disposal. The Coin Dance team also enables tracking of additional national currencies for BitSquare, in the form of CAD and NZD. Peer-to-peer bitcoin trading platforms are becoming more popular, that much is certain.

Additionally, the team added new currencies for the Paxful exchange platform as well. Tracking trades in CNY, JPY, NZD and AED is of great interest for sure. The United Arab Emirates have been relatively quiet on the bitcoin front so far. Then again, that does not mean the country is not warming up to bitcoin. Judging from the charts, it is evident there is some weekly Paxful volume in AED for quite some time now.

It is impossible to deny bitcoin makes an impact all over the world. While the trading volume may be smaller than people expect, it is worth keeping track of. It also goes to show peer-to-peer trading platforms are invaluable to the cryptocurrency ecosystem. Centralized exchanges can be scrutinized by governments, whereas decentralized platforms do not hold onto customer funds.

Tags: Bitcoin NewsNational Currenciestrading
TweetShare
BitStarz Player Lands $2,459,124 Record Win! Could you be next big winner? Win up to $1,000,000 in One Spin at CryptoSlots