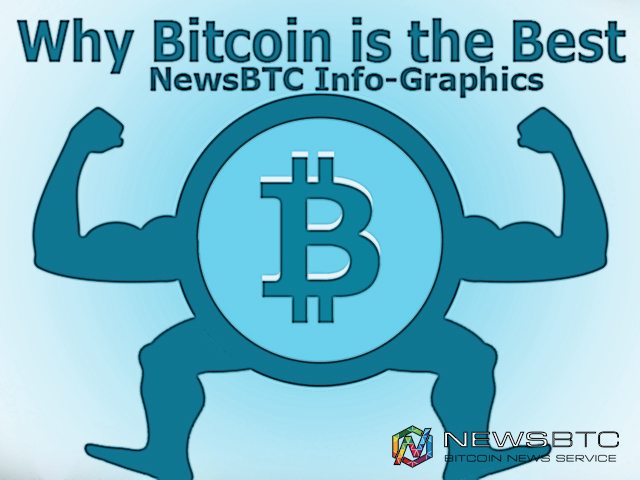 NewsBTC Infographics: Why Bitcoin Is The Best

Ever since Satoshi dropped the Bitcoin protocol on the world, it’s changed how people transact and has expanded our basic understanding of mediums of exchange. Bitcoin is a better system than fiat, credit cards and traditional trading tools. The digital currency is a first class vehicle of exchange that is scarce, borderless, decentralized, open source, and so much more. Here’s why Bitcoin is better than the rest!

Bitcoin doesn’t charge an annual fee to use it. It doesn’t pillage merchants with its fees either like credit card organizations. Fees are merely a few cents and exponentially less than companies like Visa, Mastercard, Western Union, and Money Gram.

There is no Bitcoin CEO. No entity or individual controls the cryptocurrency. It is not issued by your local government or any officials. It is not tied to a company or corporation. It is a network of peer-to-peer transactions and computational consensus.

Bitcoin’s protocol is open source. Anyone can view it here.

Unlike the central banking system and the Federal Reserve’s fiat, the digital currency Bitcoin is scarce. There are only 21 million available Bitcoins and there will never be any more than that. There is no bailout, quantitive easing, hyperinflation, and private auditing. It is an open source, peer-to-peer network very different than the traditional fractional reserve banking and Keynesian failures we see today. For this reason, it is immutable and will not suffer to interventionism.

Very similar to BitTorrent the Bitcoin protocol is a permissionless peer-to-peer network.

Bitcoin settlement is final and quicker than most systems today as far as finality is concerned. There are no chargebacks, double spends or any means to tamper with the protocols cryptographic assurance.

Bitcoin is a first class cryptocurrency for ALL the people in this world. It is borderless and can be used by anyone, 24 hours a day, seven days a week.

If you have never heard of Bitcoin before learn more about it by reading this article.

Tags: Bitcoin FeesBitcoin newsBitcoin SettlementBorderlessdecentralizedNewsBTC Infographicsopen sourcep2pPermissionlessScarcity
Tweet123Share196ShareSend
BitStarz Player Lands $2,459,124 Record Win! Could you be next big winner? Win up to $1,000,000 in One Spin at CryptoSlots