Strong Q2 results from Tesla have some industry observers calling it the new Bitcoin.

$TSLA is the new Bitcoin

Tesla stock has some way to go to top Bitcoin’s performance. But being up 9,300%, since going public in June 2010, is still an impressive motion towards that goal. 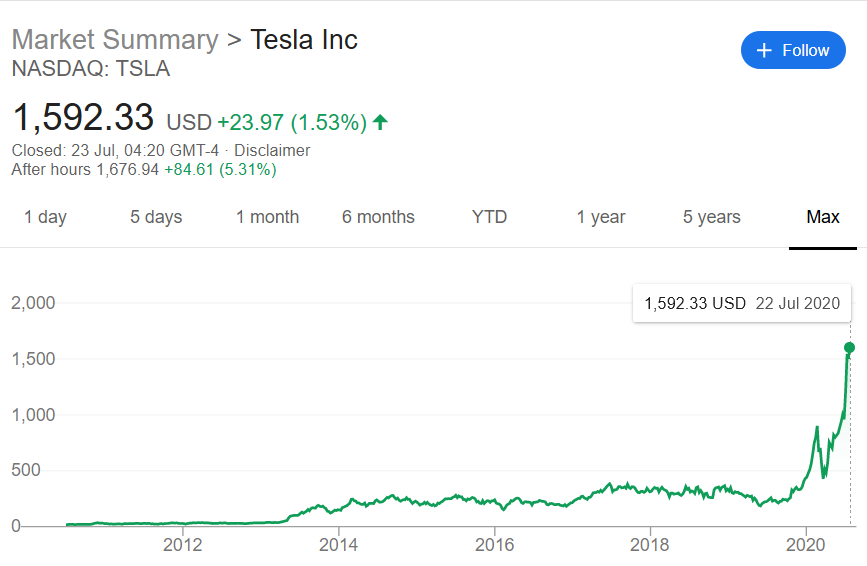 And with Tesla being one of the stand out stocks of 2020, it’s natural to draw comparisons to Bitcoin. However, the question is, can Tesla continue climbing higher?

The release of Tesla’s Q2 results shows the company performed better than expected. Investors responded by pushing the stock price up 4% during pre-trading hours.

Nicholas Hyett, an analyst at Hargreaves Lansdown, attributed the performance to buoyant sales in China, as well as software accounting for more of the firm’s revenues.

“increasing sales in China, which look to be relatively higher margin thanks to the lower manufacturing costs, and increased recognition of software revenues.”

To bring about long term profitability, Tesla CFO, Zachary Kirkhor said the firm has set out a strategy to reduce vehicle production costs, at the same time, focusing more on revenue from self-driving software.

Some have attributed the rally to breaking news that the Office of the Comptroller of the Currency (OCC) gave the green light to US banks to provide cryptocurrency custodial services for clients.

The move is widely seen as bullish for the crypto industry, with Nathan McCauley, CEO of Anchorage, saying it provided much needed regulatory certainty on the matter.

“The OCC letter is a positive development for the entire crypto industry. A lack of regulatory clarity has been a big roadblock to more institutional activity in crypto, and major pronouncements like this help move the needle.”

Can Tesla Keep Going Up?

While Bitcoin, and cryptocurrency, continue to make inroads, Tesla is fortunate not to face the same regulatory challenges.

Since the stock market crash in March, Tesla stock has more than quadrupled to bring its market value to $290 billion.

This makes Tesla the world’s most valuable car manufacturer, with a valuation greater than Toyota, Volkswagen, and Ford combined, even though it accounted for just 0.4% of worldwide car sales in 2019.

moves like we are seeing in Microsoft and Tesla and Amazon are truly insane and unlike any i have ever seen in my life.

However, some have warned that US tech stocks are caught in an unsustainable bubble. Mark Hulbert recently commented on the disconnect between the firm’s valuation and profitability.

“Put simply, the higher a stock goes, the harder it falls.”

Hulbert suggests that selling pressure, which normally keeps price restrained, is simply not there for Tesla. As such, bulls have been able to run rampant, leading to the unrealistic gains we have seen recently.

Although it’s impossible to predict what will happen next to Tesla, given Bitcoin’s strong correlation to traditional markets, caution should be exercised.

Tags: bitcoinbtcusdBTCUSDTelon musktesla
TweetShare
BitStarz Player Lands $2,459,124 Record Win! Could you be next big winner? Win up to $1,000,000 in One Spin at CryptoSlots