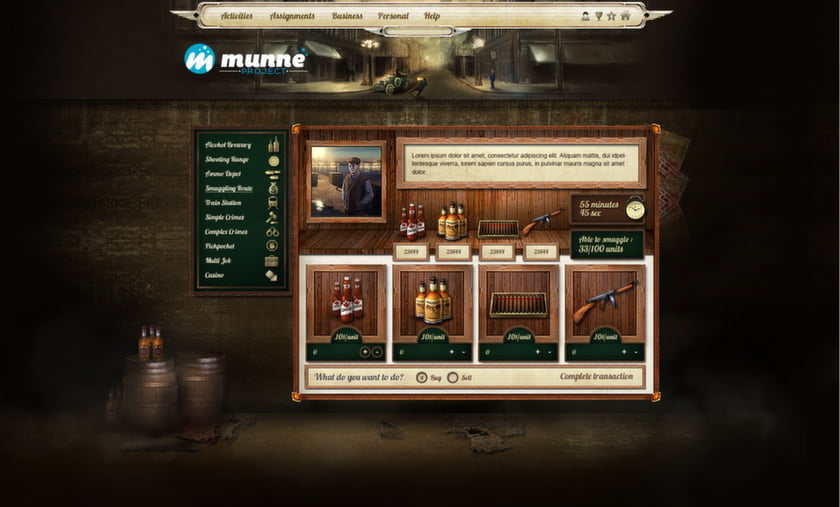 The first installment of Blockchain Gaming featured Moonga, an existing title retrofitted with blockchain technology. That will inevitably be the fate of all online video games, from MMORPGs to first-person shooters, as the advantages of decentralization become obvious.

Many developers, however, are building blockchain-based games from scratch, such as the team behind Munnecoin, a mainstream-oriented proof-of-stake coin with a 90-second block time. You can tell a lot about their target demographic from the promotional video on their homepage.

They created an MMO called the Munne Project to help market their coin and cryptocurrency in general. I was given a test account, and devoted some time to sussing out its strengths and weaknesses. The game is still in alpha, so I cut them a bit of slack, but it was clear what direction they’re going in.

The Munne Project is basically a free web-browser game, a genre not known for storytelling. It takes place in Prohibition-era North America, in stereotypical versions of cities like New York, Chicago, Toronto and Detroit. You are a mobster, and the non-player characters are all associates, rivals, or victims of your criminal behavior.

The details of your surroundings are fleshed out by the various missions you can perform. NPC text is delivered in ’20s slang, as per the setting, but they’re not interactive enough for you to truly get to know or care about them. The main quest line is basically just a selection of those missions, without any real continuity.

Of course, that’s true of a lot of renowned sandbox games, such as EVE Online, for example. The Munne developers are probably hoping their game will follow the path of other MMOs, wherein the story is generated by the actions of players and the complex alliances they form. Time will tell.

The Munne team cares a lot about presentation, judging from their expressed belief in the importance of professional design. Aesthetics are highly valued by mainstream users, so the visuals in the Munne Project are heavily stylized, almost like an old crime drama.

The visuals are in color, so they’re not exactly noire, but everything looks and feels very Prohibition-esque. Dominant shades of brown make it look gritty and real without seeming too dark. It’s a violent and competitive world, but one filled with the optimism of a growing young nation of opportunities.

There were previously some graphical bugs which messed up the user interface, but those now appear to be fixed. My greatest complaint is the typos that still remain, which—at least for me—seriously detract from the perceived production value. The game could also benefit from sound effects for various actions; if Munne is worried that sounds might annoy some players, the developers could easily add an on/off button for them.

As stated before, the Munne Project is an MMO browser-based game. It takes place in real time, with timers on most actions to limit how frequently they can be performed. In addition to the missions in each city, you can engage in street fights, extortion, or the shooting gallery, almost all of which reward you with money and experience points, which are used to buy new equipment and upgrade your character (respectively).

You can also buy, smuggle and sell alcohol, as well as attack and form alliances (known as “families”) with other players. These latter features should become more interesting as the game world populates, but for now it all feels rather repetitive. One main quest in particular requires you to perform a specific crime dozens of times, which prevented my from completing the storyline in time for this review.

Most of the gameplay bugs have been patched, but a few remnants remain. Missions frequently time out or fail to initiate properly, but that merely requires you to refresh the page. I also noticed that money you place in the national bank doesn’t accrue interest as stated, but maybe that was intended as an educational message about the banking system. I decided to withdraw all of my money before it could collapse and ask for a bail-out, incurring a significant fee in the process.

Unsurprisingly, the Munne Project utilizes the Munnecoin blockchain. As in most free-to-play browser games, players may purchase credits which can be used to reset timers, unlock perks, or buy in-game items. Rather than requiring players to pay for them by Western Union or Paypal, however, the credits used are Munnecoins, which can be acquired at online exchanges like Bittrex, or minted via proof-of-stake.

Munnecoins are therefore access tokens, backed by the Munne Project video game. This has the advantage of being faster (approximately 90 seconds for one confirmation) and cheaper (a couple cents per transaction) than traditional methods, and Munne’s stated goal is to educate the public about cryptocurrency this way. They presumably hold a lot of coins, and would profit from the resulting value appreciation.

Realistically, though, all Munne has done is adopt a new payment method. The Munnecoin blockchain has yet to be configured for either smart property or smart contracts, so the status of each user and the in-game economy is recorded on their central server. If I could give only one recommendation to the Munne developers, it would be to remedy that as fast as possible—in its current form, their use of cryptocurrency comes across as rather gimicky, more about marketing than blockchain gaming.

The bugs will probably be ironed out before the alpha is over, but I wasn’t made aware of any further blockchain integration plans. Therefore, I wasn’t compelled to put any money into the game, given that I’m already playing another browser game which—despite forcing me to use PayPal—is a lot more polished and fun. Almost all of the Munne Project‘s features are available to free accounts, however, so I’m keeping mine, for now.

Tags: altcoinsbitcoinblockchainblockchain gamingcryptocurrencyGamesgamingMMOMunnecoinOpinionvideo games
TweetShare
BitStarz Player Lands $2,459,124 Record Win! Could you be next big winner? Win up to $1,000,000 in One Spin at CryptoSlots