What Real Impact Has China Had on BTC?

Regulators across China are intent on shutting down all Bitcoin operations in the country. The price of BTC has reflected these concerns, plunging from over $4,000 (September 18, 2017) to a level of around $3,718 (September 24, 2017). In fact, BTC peaked at over $5,000 per unit by Friday, 1 September 2017, and BTC has rapidly tapered off since then. A big part of the reason for this precipitous decline in BTC is China, vis-à-vis regulatory measures.

Traders in China have multiple options available, despite the government crackdown.

These include the popular messaging app WeChat which currently allows Chinese traders to exchange their BTC with one another. Present stats indicate that WeChat has some 900 million registered users who can interact with one another via chat functionality for buying/selling, money transfers etc. The beauty of this social media platform is that it is not necessary to disclose the reasons for money transfers.

Recent moves from China suggest that regulators will be tightening the screws on cryptocurrency such as BTC, BCC, ETH and other cryptocurrencies across the board. The latest news from China is that the Chinese government will close all available exchange channels, not only commercial but personal as well. As a result, many of the Bitcoin exchanges in China have announced their intentions to close their doors, vacate the country, and/or move offshore. As for the popular social messaging app, WeChat it remains to be seen how long BTC exchanges will bremainviable. Increased monitoring of social media channels like WeChat are currently underway.

On Thursday, 7 September 2017, Chinese authorities announced that WeChat messaging groups would bear 100% responsibility for the behaviour of their registered users. Numerous arrests have already been made, and disciplinary measures have been initiated. Currently, Chinese BTC traders have multiple options available to them, including those that have been blacklisted. Thanks to the presence of VPNs, services like Telegram allow Chinese traders to continue illicit trading in BTC. Since many of the platforms are based overseas, the Chinese government does not have jurisdiction and authority to block their services from Chinese traders. 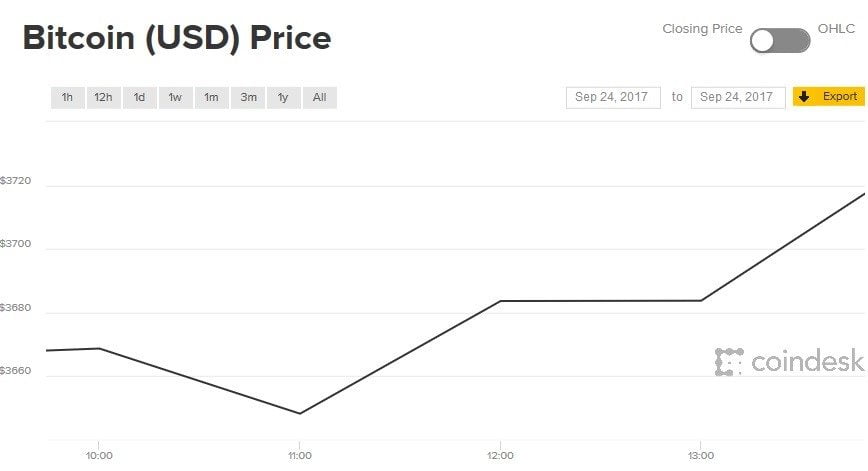 Despite Chinese crackdown initiatives, on Monday, 18 September 2017, the price of BTC rose above $4,100 per unit. The plan to crack down on digital currency trading in China has had a muted effect on BTC, although concerns of a wider crackdown remain. This is the biggest undertaking by the Beijing authorities to clamp down on Bitcoin trading. They are concerned that BTC and cryptocurrency could rival the CNY (Chinese Yuan), and they are keen to shut it down ASAP.

In mid-September, the price of BTC dropped sharply after an announcement by China to ban all BTC trading. The BTC/USD exchange rate dropped 16% after it was announced that regulators would be shutting down commercial exchanges. However, most all the losses were recovered within short order. This, despite announcements by Huobi and OKCoin that they would be promptly shuttering CNY/BTC trading activities.

Trade-24 finance guru, Charles Martin believes that cryptocurrency is just taking a breather, ‘For the year to date, BTC remains up several hundred percent – a testament to massive trader interest, particularly in Japan and South Korea. We can expect this tug-of-war between Chinese regulators in BTC to have a short-term impact on pricing. However, this is likely a pyrrhic victory for the Chinese government and BTC will prosper over the long-term.’

It remains to be seen how far the Chinese government is willing to go to ban BTC trading. A blanket ban would render the BTC mining industry defunct. The government may also decide to seize BTC mining equipment and facilities, and severe punitive measures could be imposed against companies that dabble in BTC in any way. Investors stand to lose millions of dollars in financing from their loans to purchase BTC mining equipment – hardware and software. Many of these miners are being encouraged to abandon ship, and salvage whatever is possible before the tidal wave of regulatory pressure from the Chinese authorities is brought to bear.