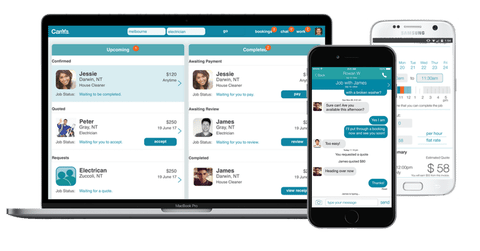 With this rapid growth in internet usage comes a drastic increase in functionality too. The web has developed from being a way to upload information to a medium over which products and services can be exchanged. For Q2 2017, E-commerce sales accounted for 8.9% of total sales in the US alone. The rate has been steadily rising for every quarter since 2008, despite the impact of the global financial crisis.

Online marketplaces like Upwork and Etsy entered the scene several years ago and are still active with millions of users. Ikea made headlines by acquiring Gig economy company TaskRabbit, which provides handymen to assist with various manual labor tasks.

With the advent of such companies, the online service industry is waiting for the next big thing, the next eyecatcher. CanYa, a blockchain based platform that was created in December 2016 in Australia, hopes to be the online marketplace the world needs.

CanYa is a cryptocurrency based online marketplace where service providers can connect with customers. The decentralized nature of the platform allows sellers to interact with end users directly–a truly peer to peer experience. As blockchain technology continues to revolutionize a variety of industries, the team at CanYa has set their sights on online service marketplaces. A Decentralized Marketplace Means Better Options and a Better Price

CanYa’s platform operates as a decentralized exchange. Users connect directly, eliminating the third party who hosts transactions. There is greater transparency in pricing in addition to lower costs. To use an analogy, it is similar to how buying a car through a dealer is almost always more expensive than buying directly from a private party.

On the blockchain platform, providers can list, advertise, and sell their services at the price they want. They can choose from a variety of fee models, including one-time transactions and ongoing subscriptions. The platform is based on meritocracy–better providers will get more business and visibility, which promotes legitimate business and minimizes false advertisement.

On the flip side, buyers can filter services and choose the service and model that best suits them. They have the option to make one-time purchases like repairing a broken window or selecting ongoing maintenance programs like lawn mowing or hedge trimming.

Potential buyers are free to search for the services they need while resting in the fact that pricing and transactions are transparent and secure. Because the platform runs on blockchain technology, all transactions are verified and auditable, giving users a sense of whether or not the prices being advertised are fair.

Though blockchain technology can seem nebulous and exclusive, CanYa runs as an app downloadable on major smartphone app stores. The seamless and practical app lets users find each other quickly and efficiently, all while providing stability and transparency.

Cryptocurrencies are a bright prospect. Free from government overreach and central bank manipulation, they are operated on a truly free market basis. However, cryptocurrencies are plagued with historically sky-high volatility. Perhaps that’s a huge understatement. It’s not uncommon for a cryptocurrency to get cut in half in a single day.

This has understandably led some to wonder how services can be paid for with such a volatile asset. In response to these legitimate concerns, CanYa’s platform has incorporated an internal hedge.

CanYa’ s contract uses a coin with a proven value to act as collateral for CanYaCoins. Thus, the value of the coins used in transactions are frozen–one dollar in means one dollar out, no matter what price fluctuations transpire. The hedge is able to compensate for 0.8 downside risk, while any losses sustained beyond the threshold are partially covered.

The result is users’ peace-of-mind. Buyers and sellers can transact business as usual without having to worry about losing money for something they can’t control. The proprietary system is a welcome addition to an already stalwart platform.

CanYa released its beta into Australia on its own dime in December 2016. However, in order to meet their long-term objective of providing global access, CanYa needs to raise additional funds. The ICO, which begins in a few days, will help finance a cryptocurrency payment layer.

Proceeds will also be used to help fund the global launch in March 2018 along with the second version in July 2018. This version will include in-app translation services, video calling, chat-bots, and advanced desktop features, in addition to bug fixes and platform upgrades.

Finally, CanYa hopes to roll out its advanced matching feature, which connects best customers with the best providers for each request. It is slated for an October 2018 release.

Tags: blockchainblockchain technologyCanYacryptocurrencyICO
TweetShare
BitStarz Player Lands $2,459,124 Record Win! Could you be next big winner? Win up to $1,000,000 in One Spin at CryptoSlots