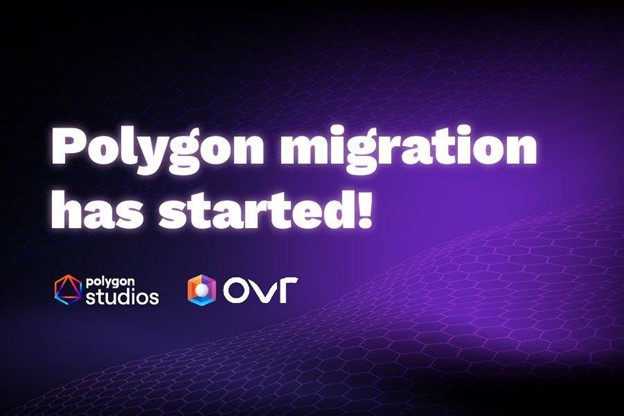 OVR has successfully completed the first phase of its two-phase migration to the Polygon Network. The move began in January and has already shown promising results for the project, with the second phase to be deployed in February. It announced that it has transferred the Merkle Proof and minting functions from the Ethereum network over to the Polygon network, allowing for NFT minting at low fees.

Furthermore, OVR also announced that Polygon network payments have been added to the Ethereum and BSC network payments currently available to users in the primary market. This will greatly decrease transaction costs while providing a higher scalability potential for the metaverse project.

Ethereum may be the leading smart contracts platform in the crypto space but there is no doubt that it is an overcrowded and oversaturated network. This high demand on the network, coupled with the network’s inability to scale properly to accommodate its growth, has led to recurring scalability and fee issues, which happen to be some of the highest in space.

In light of these problems, OVR, a project initially built on the Ethereum network, has had to move operations to the Polygon network which can accommodate its growth and provide low transaction/minting costs for its users. The high rate of adoption of the Polygon blockchain and its closeness to the Ethereum network also helps to dramatically reduce the risk of ending up in “ghost chains.”

“The blockchain scalability landscape is vast and quickly evolving; choosing one solution over another is not a simple task, but it’s a multidimensional problem with many variables and forecasts to digest,” the website reads.

Polygon presents as the best choice for OVR given its low transaction costs, its decentralization trade-offs and project vision, adoption trajectory, and vicinity to the Ethereum network/EVM compatibility.

With the move to Polygon, trading OVR tokens has never been cheaper. Users can now easily swap their OVR tokens on the Polygon implementation of Uniswap V3. Gas fees for each swap are at $0.01 each as the move has made transactions easier and cheaper.

What’s more, is that OVR tokens can now easily move from Ethereum to Polygon and vice versa using the Polygon Bridge. It is a simple DApp that only requires a user to connect their wallet to it and they’re good to good.

Just as transaction fees have dropped with the move to Polygon, so have NFT minting fees. OVR users are able to mint their OVRLands for really cheap on the Polygon network compared to the Ethereum network. This capability is currently live and OVRLand holders can mint them as NFTs on the Polygon blockchain, which can only be sold on the OpenSea marketplace for the time being.

The second phase of the move to Polygon will come with even more exciting capabilities such as batch minting of all light minted OVRLands, direct minting of new primary market sales, an Ethereum <> Polygon NFT bridge, as well as a fully decentralized secondary market where users can sell their OVRLand NFTs.

It is up to each user if they want to mint their OVRLand on Polygon now or wait for the batch minting that comes with phase II. Those who choose to wait will have their OVRLands, which are currently saved as Merkle Proofs on Ethereum, minted directly to their wallets on Polygon.

There are currently more than 700,000 OVRLands in circulation owned by over 24,000 wallets. OVR is also pushing an update to its app to improve the AR experience of its users.