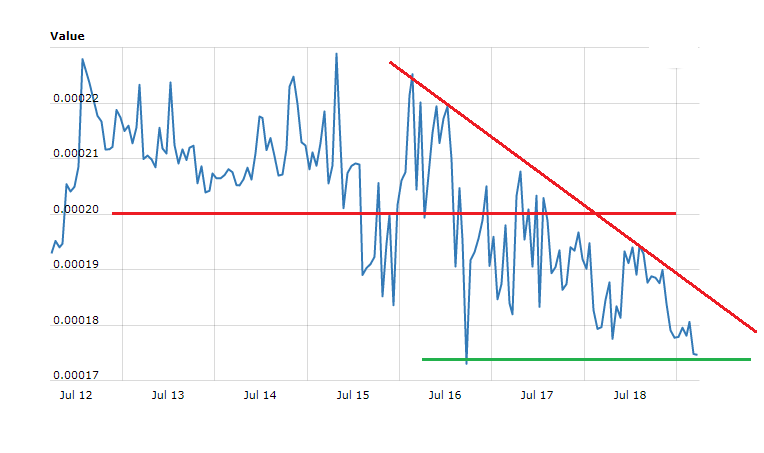 Creditbit price remained under bearish pressure against the US Dollar and Bitcoin, and now CRB/BTC is struggling to hold the 0.00018BTC support.

There was a continuation of the last bearish leg in Creditbit price below the 0.00020BTC level against the Bitcoin. The price mostly consolidated with a bearish tone and even broke the 0.00018BTC support. However, there were no major declines and a low was formed near 0.00017BTC. At the moment, the price is struggling to remain above the 0.00017BTC, and may decline further for a downside push.

On the upside, there is a new connecting bearish trend line with resistance at 0.00019BTC forming on the 7-day chart of CRB/BTC. Moreover, the 23.6% Fib retracement level of the last decline from the 0.00023BTC high to 0.000174BTC low is also around the trend line resistance. Above it, the 0.00020BTC level might come into the picture. It acted as a support earlier, and now buyers could struggle to take the price above 0.00020BTC.

Overall, the price remains at a risk of more losses below 0.00017BTC in the near term. CRB also found sellers against the US Dollar, and moved below $0.38. It even traded below $0.35, but later managed to recover. Looking at the price action in CRB/USD, there are chances of a recovery in the short term. On the upside, the most important resistance is near $0.45.

Hourly MACD – The MACD for the CRBIT/BTC pair is well into the bearish zone.

Hourly RSI – The RSI for the CRBIT/BTC pair has reached oversold levels.