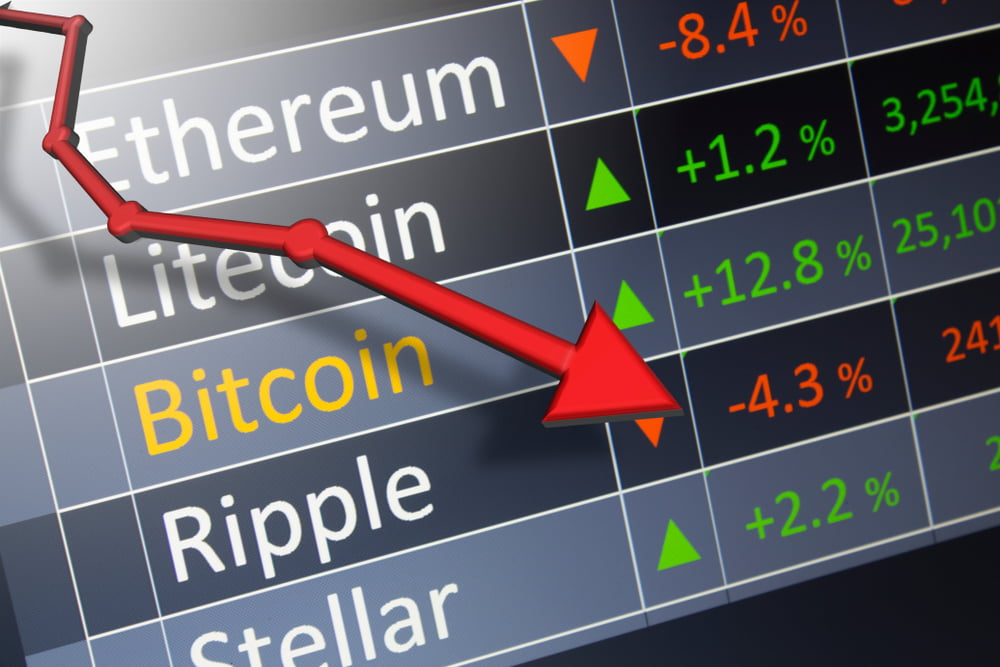 Bitcoin and rival cryptocurrencies slipped by up to $20 billion in just two days, beginning the week on an extremely pessimistic note. Almost all the assets that recorded massive gains heading into 2020 corrected deeply, with supersonic Tezos leading the losses with an 8 percent drop.

The high-cap cryptocurrencies that went into losses this week also included Ethereum, Bitcoin SV, and Bitcoin Cash – all of which slipped by 4-6 percent on a 24-hour adjusted timeframe. Meanwhile, Litecoin and EOS were among the least-impacted tokens, registering dwarfed losses of 2.1 percent and 0.94 percent, respectively.

The crypto market’s overall losses came in tandem with similar moves in the global equity bazaars. The US benchmark S&P 500 index recorded its worst daily performance in the last two years on Monday. Likewise, the European benchmark Stoxx 600 surrendered all of its 2020 gains to Coronavirus fears.

The virus is likely to weigh on the sentiments of investors this quarter. It has killed about 2,700 people and has infected about 80,000 more both in China and the rest of the world. Almost all the big economies are reporting the first cases of the epidemic, scaring investors further away from the risk-on markets.

As the pandemic grows into the market’s conscience, its risks have seldom helped to push cryptocurrencies as safe-haven. Alex Krüger, a prominent market analyst, said in a tweet earlier this week that Bitcoin, the benchmark crypto that typically leads the market rally, is doing its own thing against Coronavirus.

Chart shows prices of US tech stocks, US treasuries, gold and bitcoin during the current round of panic.

Three of these are strongly correlated during times of stress. The fourth does its own thing.

The chart illustrates how unreliable bitcoin correlations with risk assets are. pic.twitter.com/NDhvvBsnex

The comments came as a contradiction to years of promotion of bitcoin as an insurance asset against global risks. Noted economist Nouriel Roubini also condemned the cryptocurrency supporters for spreading a false narrative, stating that “crypto is a criminal scam.”

“When there’s a prob in the world – econ crisis, even cancer – the self-serving crypto lunatics & blockchain crooks claim that crypto/blockchain will resolve that problem, now even COVID-19,” said Mr. Roubini. “Let’s be clear: all crypto is a criminal scam & blockchain is the most useless technology ever.”

Mati Greenspan, the founder of Quantum Economics, meanwhile said that bitcoin and the rest of the crypto assets were tailing the stock market.

The popular analyst made the statement after comparing bitcoin’s near-term price moves with that of the US stock market and crude oil. He noted that both the mainstream markets were moving in line with bitcoin’s, showing an absolute interim trend correlation against Coronavirus.

The close proximity between the two could help bitcoin extend its upside move in the coming sessions. It could be due to central banks’ promise of injecting more cash liquidity into the system to offset the Coronavirus risks. As has happened in February, the move could lead some part of this money into the crypto market.

On a whole, bitcoin and the rest of the cryptocurrencies are still up by almost $100 billion, as measured from its December 2019 bottom of $166 billion.