EOS Collapses in Spite of Coinbase Earn and Voice Announcements

As Facebook consults with the US CFTC, Block One plans to launch Voice. It is a social media platform where users won’t be products. Perhaps that will help steady EOS, which is down 20.5 percent week-to-date.

The ultimate quest for every blockchain project is to launch a useful platform. As the sphere matures, some projects are ambitious. Block One, the builder of the EOSIO platform, is a fitting example.

Not only did they decide to introduce a consensus algorithm with new concepts like voting and governance, but the power wielded by the 21 Block Producers is often a trigger for debate. It’s a weak point where critics dig at, talking of centralization.

All the same, what EOS introduces is a scalable, fast and reliable network from where projects can satisfactorily launch their dApps. Together with Tron, which is another network with a similar consensus algorithm, the two dominate by the number of supported dApps. Besides, they are highly ranked by Chinese CCID.

Nonetheless, Block One isn’t settling. Their eyes are on creating a decentralized social media that will run from their scalable and high throughput network called Voice. Prioritizing users, CEO of Block One Brendan Blumer said Voice would not churn marketing data from their subscribers:

“Our content. Our data. Our attention. These are all incredibly valuable things. But right now, it’s the platform, not the user that reaps the reward. By design, they run by auctioning our information to advertisers, pocketing the profit, and flooding our feeds with hidden agendas dictated by the highest bidder. Voice changes that.” 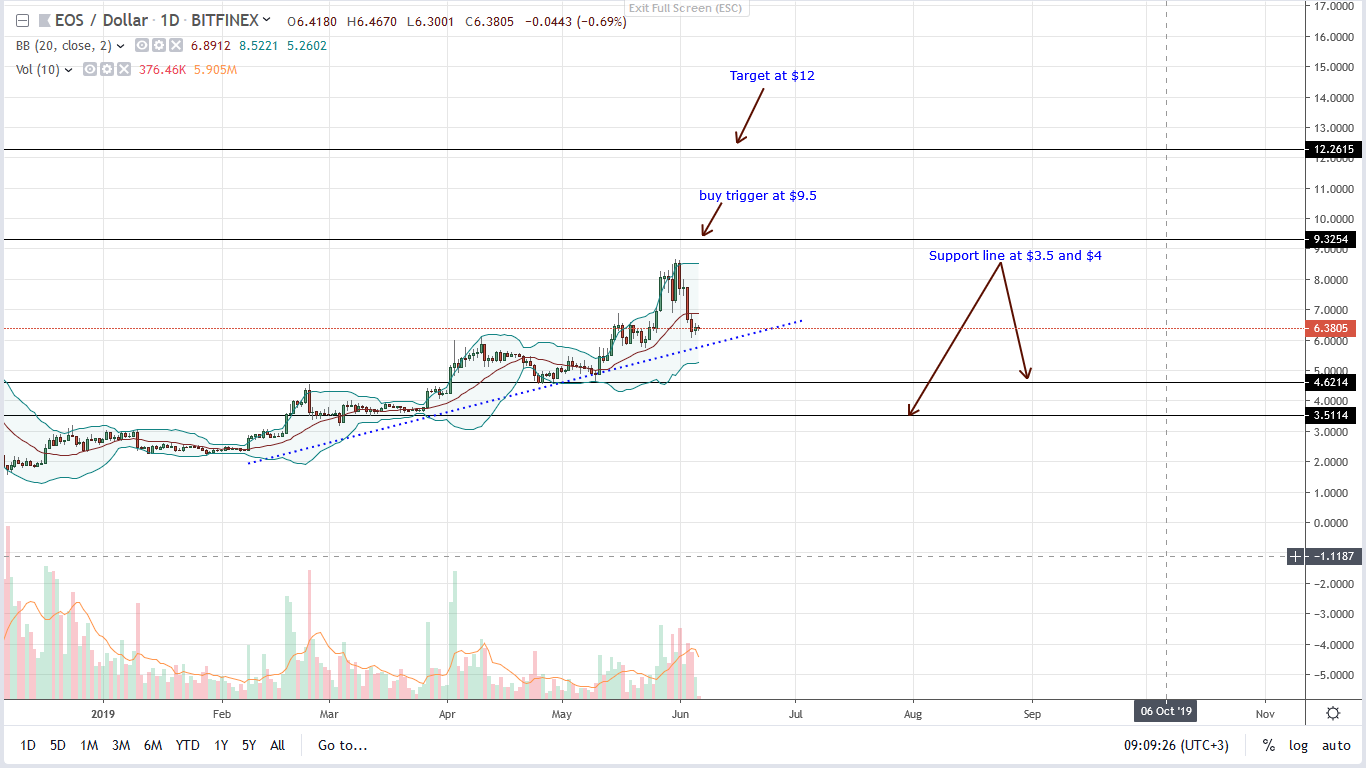 At fifth, EOS is changing hands at $6.36 at the time of writing. Stable and up 1.9 percent in 24 hours, the coin is also the biggest loser from last week’s close, falling 19.8 percent. Even though buyers are in control, bears have the upper hand from a top-down approach.

Note that EOS slid by more than 90 percent before bottoming up and finding resistance at around $9.5. The level is the 61.8 percent Fibonacci from the coin all-time trade range. Moving on, for trend continuation, it is imperative that prices close above the $9.5 level.

Accompanying this rally should be high trading volumes that will be the necessary impetus for traders aiming at $12. If not, and EOS tumble below the main support trend line and $6, resulting selloff could see prices slide to $3.5.

As aforementioned, EOS bulls are in control and May 27th bull candlestick anchors this trade plan. It has high trading volumes of 10 million. As such, any close below $9.5 or drop below $6 ought to be with high participation preferably exceeding 10 million.

Tags: block.onebrendan blumereos
TweetShare35
BitStarz Player Lands $2,459,124 Record Win! Could you be next big winner? Win up to $1,000,000 in One Spin at CryptoSlots