Ethereum, the second-largest blockchain network by valuation, has the potential to jump to replace Bitcoin to become the top digital asset, says Ryan Watkins of Messari.

The senior research analyst cited a flurry of catalysts that could lead to the so-called flippening event. Firstly, Ethereum’s full protocol upgrade to proof-of-stake from proof-of-work blockchain would lead to introducing a “burn mechanism.” It means the network would pre-algorithmically destroy more ETH tokens than its active supply, leading to better scarcity.

Secondly, Mr. Watkins noted that the imminent Ethereum upgrade would make its network more secure than Bitcoin. As a result, it would assume the most active blockchain’s role in the space, attracting new projects and users from the emerging decentralized finance and non-fungible token sector. Bitcoin would lack those features as it transitions to become an anti-inflation, anti-fiat store-of-value asset.

“The selling point of Bitcoin over Ethereum as a store of value asset boils down its monetary policy being very predictable and the Bitcoin blockchain being very secure,” Mr. Watkins said. “I think that with the shift to Eth2 and to Proof-of-Stake, […] Ethereum may actually potentially be more secure than Bitcoin.”

“If Ethereum is more secure and it [has] a stronger monetary policy, well, then what is the bull case for Bitcoin in this scenario,” the researcher added.

Bitcoin, with its one trillion dollars plus market capitalization, outgrows Ethereum by roughly $800 billion. The benchmark cryptocurrency makes for about 60 percent of the entire crypto market valuation, which would mean Ethereum bulls would need to sprint instead of jogging if they ever want to flip Bitcoin.

But Ethereum 2.0 promises to bring something that Bitcoin clearly lacks: scalability and speed. The upgrade would instantly enable Ethereum’s vast network — which backs projects like Uniswap and Tether — an edge over Bitcoin, which does not support a dapp-friendly environment.

In retrospect, the law states that “the effect of a network is proportional to the square of the number of nodes in said network.” To put it mildly, the more users a blockchain has, the higher its utility goes. In turn, higher transactions lead to more fee revenue. As a result, the token backing the network experiences a spike in its value. 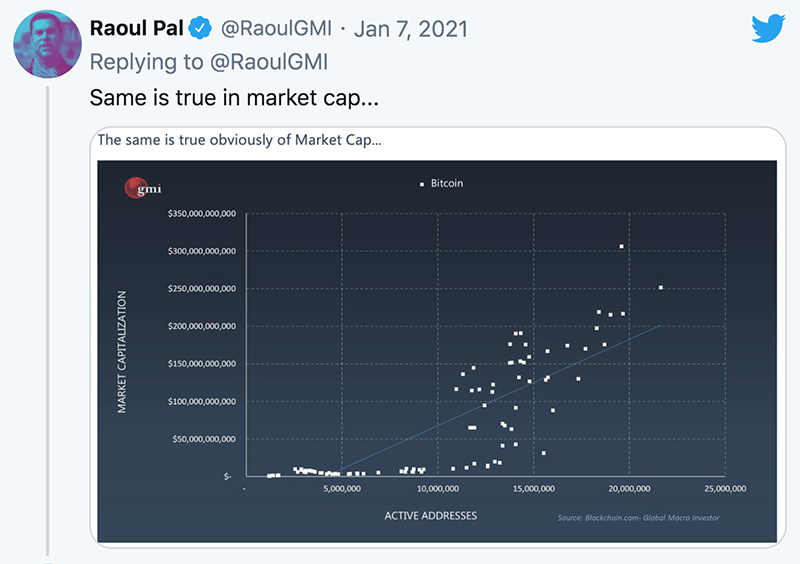 Mr. Pal added that the Ethereum network resembles what Bitcoin was at its early stage. And the former is growing faster, which would have its market cap sprint ahead of the latter.

“My hunch is BTC is a perfect collateral layer but ETH might be bigger in market cap terms in 10 years,” he added. “Money and collateral is just the base layer. Everything builds on top. The store of value is collateral, the trust layer and exchange of value is bigger.”